The Hanerutchi 2 (はねるっち2) is a Tamagotchi released in August 2006 exclusive to Japan. The programming is based on that of the Chou Jinsei Enjoi Tamagotchi Plus, while the characters are based on characters from the Japanese comedy show Haneru No Tobira. It is the sequel to the Hanerutchi 1.

The Hanerutchi 2's shell design resembles that of the Entama. It comes in two colors: red and blue. Both of them have a white shell and a Japanese dragon printed on the front. It also has white, red, or blue beads which spell out "HaneTobi" in katakana, short for Haneru no Tobira.

The Hanerutchi 2's background has a smaller image of the banana, and "You knock on a jumping door!" written in English in the bottom left corner. The background is plain and does not feature grid paper.

The Hanerutchi 2's gameplay follows the Entama and UraTama, although it doesn't have any Dating Card characters and cannot cook. It has new characters, gameplay and redesigned graphics to make it related to Haneru No Tobira. There are also three new GUTS categories; Music (indicated by a quaver note), Phys. Ed (indicated by a fist), and Comedy (indicated by a smiley face). Like with the Entama, when a baby is born, they will have ten points in the category that corresponds to their group.

This icon is used to check the character's overall health status. There are five screens; Hunger and Happiness hearts, GUT points, Group, Career and Gotchi points, Age, Weight and Name and Gender and generation.

This icon is used to feed the character. There are four built in foods; two meals and two snacks. Other foods can be purchased from the Street Vendor. Up to three purchased foods can be stored. There is no cooking option on the Hanerutchi 2.

This icon is used to clean up the character's messes and make it use the toilet when it needs to. The function of this icon is the same as other Tamagotchis.

The first game raises music points. The objective is to catch the notes into the trumpet while avoiding the messes. As the game progresses, the notes and messes fall faster. The speed of which they are falling is indicated by Gatten Abukotchi, who runs on the spot and changes its pace to match that of the falling objects. Catching 100 notes counts as a win, pays out 500 Gotchi points and adds 10 to Music GUT points. Catching a mess will end the game.

The second game raises Phys. Ed points. The objective is to hit blocks with a hammer by aiming at the small triangle. At the top of the building, Petitchi is replaced by Animaru Kajikuchitchi. Hitting 30 blocks counts as a win, pays out 500 Gotchi and adds 10 to Phys. Ed GUT points. Hitting in the wrong spot or taking too long to hit the block will cause Animalu Kajikuchitchi to fall down and end the game.

The third game raises Comedy points. Ootamutchi will run down a track, and the objective is to reach the end of the track while avoiding messes. The score counter increases by one every two seconds, and when it reaches 50, it will count as a win, pay out 500 Gotchi and add 10 to Comedy GUT points. If Ootamutchi runs into a mess, the game ends.

This icon is used to check letters, or when a new letter is recieved. There are two options; Gotchi Shinbun and Letter. Gotchi Shinbun is a newspaper which contains different news items, and will be delived at 9:00 AM and 4:00 PM every day. Letters can be either good or bad news, or when the character is entering kindergarten, school, getting a job or recieving salary based on its rating.

This icon is used to cure the character when it is sick. Using this icon will contribute a dose of medicine. Sometimes it may require two doses.

This icon is used to access the store of items collected. There are 4 categories; Work Items, GUTS UP items, Medicines and Miscallaneous items.

This icon is used to view family history. There are three options; friends, family and deceased.

This icon is inaccessible. It lights up when the character needs attention. Failure to respond before the icon disappears counts as a care mistake, and the character may become sick as a result.

The egg looks like the Entama egg, except in place of hearts, there is a stroke pattern. It takes about one minute to hatch.

There are two baby characters. Each group has the same baby character; Akachantchi. There are black and white variations for boys and girls. The baby will evolve into a child after one hour. As all three groups have Akachantchi as their baby stage, the only way to tell which group it is in until evolution is to check the status screens.

There are six child characters. Each group has one male and one female child. In the child stage, the character will be given a bag and be able to go to Pre-school. The child will evolve into a teen after 48 hours after evolving into a child, graduating from preschool immediately before evolution.

There are twelve teen characters. Each group has two male and two female teens. One of which is obtained from having less than four care mistakes at child stage, while the other is obtained from having four. Teenagers are given two special School items and can go to school. There are three classes: the Music class (Buchigire Sensei), the Phys.Ed class (Animaru Kajikuchi Sensei), and the Comedy class (Pante Sensei) - the class they are put in depends on their highest GUTS points. The teen will evolve into an adult after 72 hours of evolving into a teen.

There are twenty-one adult characters. Each group has four male adults and three female adults. One of the adults is obtained with high Music GUTS points, one with high Phys.Ed GUTS points, and one with high Comedy GUTS points. The fourth male adult is a special character who evolves from the male group representative if they collect at least 200 GUTS points in their corresponding category, apply for the job at the top of the list (and get approval from Gogobuchou), and raise both their GUTS points in the same category to 999 and their job rank to three stars within 72 hours. If all GUTS point values are the same, the teen will evolve into the group representative, which is the adult character who is obtained with GUTS points in the same category as that associated with the group.

At the adult stage, the character will graduate from school and be given a job offer - which ones are offered again depend on its highest GUTS points and different jobs have different levels of minimum points needed to successfully get hired. If the character succeeds in getting a job, it will be given a salary. The following day, the matchmaker will come three times a day to arrange a marriage. The user can choose to accept or decline the matchmaker's offer. After marriage, the character will give birth to a baby and care for it automatically unless it becomes sick or excessively hungry. The baby and adult will both sleep and wake on the same hours until the adult leaves 24 hours after marriage.

If it does not marry by age 16, it will evolve into Morinoshintchi and retire from its job. Morinoshintchi can be any gender and can live to be 99 years old. It can only mate with another Morinoshintchi of the opposite gender.

If the character is neglected or reaches an old age, it will pass away. When this happens, the user can then hatch a new egg. 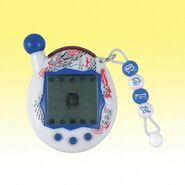 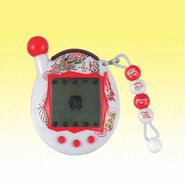 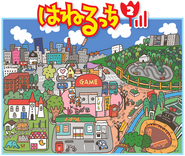 Hanerutchi Town
Add a photo to this gallery

Retrieved from "https://tamagotchi.fandom.com/wiki/Hanerutchi_2?oldid=99836"
Community content is available under CC-BY-SA unless otherwise noted.