Hapihapitchi resembles an animal fairy. She somewhat has the appearance of a lamb or a puppy. She has two white wings, two swirly pink horn-like ears on the sides of her head, and a heart-shaped stalk on her head. She has white fur (with a light pink tint) and a pink collar. She has rounded bangs on her forehead. She has a little pink nose and pink cheeks. Her eyes are small and brown with low, tiny round highlights.

Hapihapitchi is a very popular Tama Pet, and is often called very cute. She is loved by both boy and girl Tamagotchis, because she makes them happier. She follows Chamametchi around and is also a friend of Telelin. Sometimes she gives Telelin rides in the sky. She gets along well with other Tama Pets such as Puchiberitchi. She's sweet, kind, caring, gentle and devoted to making sure that she helps make others happy by doing good deeds for others, and she gets along really well with Chamametchi, but they sometimes get into fights on rare occasions. She has also argued with Kikitchi in the anime. She adores sweets and is shown to have a love for baking.

Hapihapitchi is known to make a high-pitched howling/barking sound, "aroo," after everything she says. This is also known as a happy puppy-like "wan" (ワン) bark in Japanese. Furthermore, she repeats phrases that other Tamagotchis say (usually Chamametchi or Princess Lovelin). In the original Japanese version of anime, she also speaks in the third person for herself, whereas she speaks in ordinary third person in the English dub. She often says. "happy happy" when she is happy, such as when she was first created.

Tamagotchi: Happiest Story in the Universe

Hapihapitchi was originally going to be an item, not a living creature, called "Happy".  However, when Mametchi was activating his creation, many things went wrong; Chamametchi was carrying a tray with cups of pink lemonade while Bagubagutchi was chasing a caterpillar, and a feather landed on Kuchipatchi's nose. Kuchipatchi sneezed just as Chamametchi tripped over the caterpillar; everything went tumbling into the bubble-like orb which contained the "Happy".  The pink lemonade turned the "Happy" pink, the feather turned it fluffy, and the caterpillar made it come to life. Mametchi decided to call his creature "Hapihapitchi" instead so that it would have a Tamagotchi name. Hapihapitchi spends a lot of time bringing happiness to other Tamagotchis using her Happy Power. At first everyone is delighted by this and Mametchi is proud, but soon people begin to rely solely on Hapihapitchi to make them happy and refuse to deal with things themselves. Additionally, when Hapihapitchi tries to make Kikitchi happy, it doesn't work because of his depression. These events cause Mametchi to realize that you can't force people to be happy, and decides Hapihapitch should stop using her powers. She still uses them more later on in the movie in a desparate attempt to help Kikitchi and finally make him happy.

Hapihapitchi appears in two Tamagotchi OVAs, where Mametchi, Memetchi, Kuchipatchi, Violetchi, Chamametchi, Kikitchi and she are best friends. In the Tamagotchi OVAs, the viewer follows Mametchi's diary where he divulges information about small events that happen in his life.

In the Tamagotchi anime series, Hapihapitchi has become a part of the Mame Family and is treated more like a relative than a pet. She sleeps in Chamametchi's room and follows her around everywhere, sometimes sitting on her head. Like many characters, she is a huge fan of Lovelin. She sometimes joins Kikitchi, Imotchi, and Chamametchi on their adventures.

When Hapihapitchi sees a person who is tired or sad, she releases a pink glowing light which is happiness that she absorbs from people that are happy. This happiness also makes flowers bloom.

When Hapihapitchi is near by someone who is sad, her heart on her head will turn blue and begin beeping. The only way to stop it, is to release some of her absorbed happiness on the person, which makes the person happy.

But when Hapihapitchi runs out of happiness, the heart on the stalk on her head becomes dark blue and Hapihapitchi will become very weak. The only way to save Hapihapitchi is to put her in the hands of someone very happy.

Hapihapitchi no longer uses her happy power, the reason why is because if Hapihapitchi uses up all her happy power, she will die. She still helps people out to make them happy whenever someone needs it, without using her power. Her happy heart on her head still works though, and helps her find those in need.

In the Tamagotchi! episode Hapihapitchi Helps Out! finds Tamagotchis that are in trouble. The main Tamagotchi she helps is Winditchi, who is lost and must get back to her brother, Whirltchi.

Mermaid Lovelin, whom she loves playing with in the anime show, Tamagotchi!

She also is a police officer in some of the Thief Papillon episodes of Tamagotchi!

One of Hapihapitchi's anime poses

One of Hapihapitchi's anime poses 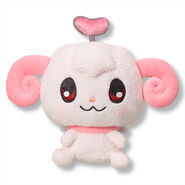 A plush toy of Hapihapitchi

Hapihapitchi as a Snowman costume

Hapihapitchi after waking up from a nightmare 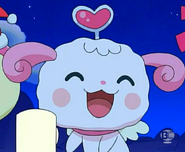 Retrieved from "https://tamagotchi.fandom.com/wiki/Hapihapitchi?oldid=100361"
Community content is available under CC-BY-SA unless otherwise noted.