Hashizoutchi (はしぞーっち Hashizōtchi) also known as Hashizotchi, is a Tamagotchi character that made its first appearance on the second generation of the original Tamagotchi.

Hashizoutchi appeared on the 15th Anniversary Character Poll as a male adult candidate.

Hashizoutchi has a pink, bean-shaped body, a yellow bill, stubby arms and legs, and a tail. In his US artwork, his body was red instead of pink. On the Tamagotchi L.i.f.e. app, it can also be dark pink or brown.

Hashizotchi is lazy and enjoys taking naps as much as possible. It dreams of becoming a Kabuki actor someday. Hashizoutchi gets very excited about loading on the mayo and ketchup on everything he eats. It is a rather amicable character, but when angry, a great anger will arise. It loves to eat, sleep and take naps.

The Nintendo Power guide to the Tamagotchi Gameboy game stated: "If you neglect your Tamagotchi when he's young, he could turn into a lazy Hashizoutchi. This adult Tamagotchi likes naps and not much else."

The Tamagotchi Video Adventures song “What’s a Tamagotchi?” says: “In the corn or in the hay, Hadhizoutchi sleeps all day.”

Hashizoutchi is a generation 2 adult that can evolve from either teen. Whether the user starts with Tongaritchi or Hashitamatchi, they must have had 75-100% Discipline while as Tonmarutchi, which starts the teen with 50% Discipline. From there, the Discipline meter must be filled to 100%. Care varies between the two teens; Hashitamatchi requires above average to perfect care, while Tongaritchi requires several care mistakes.

Hashizoutchi appears in odd generations with below average care.

Hashizoutchi is supposed to be teamed up with Maskutchi during the exploration of Earth. But when he leaves the ship, he sees an ear of corn, grabs it, and runs back into the ship. We later find out he thinks the husk makes a handy sleeping bag.

Hashizoutchi viewed from the side 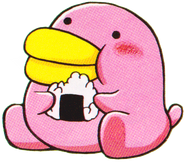 Add a photo to this gallery
Retrieved from "https://tamagotchi.fandom.com/wiki/Hashizoutchi?oldid=103682"
Community content is available under CC-BY-SA unless otherwise noted.