Male:
Hinatchi (ひなっち Hinatchi) is a teen character that debuted on the Keitai Kaitsuu Tamagotchi Plus in Japan and the Tamagotchi Connection Version 2 internationally.

Hinatchi resembles a small grey bird or penguin with shiny round eyes, yellow feet and beak, and a yellow shape on its head which may be hair.

Hinatchi is small and quick, and usually hangs out with Nikatchi. For some reason he thinks that he has the ability to fly, so every day he practices flying.

Hinatchi appears in even generations with bad care. It can become Mametchi, Kuchipatchi, Dorotchi, or Kurokotchi. It sleeps from 9 PM to 10 AM. 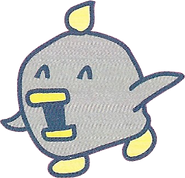 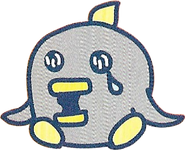 Add a photo to this gallery
Retrieved from "https://tamagotchi.fandom.com/wiki/Hinatchi?oldid=94134"
Community content is available under CC-BY-SA unless otherwise noted.