This is about the child character introduced in 2004. You may be looking for Hitodetchi, a character from Hoshi de Hakken!! Tamagotchi.

Hitodetchi (ひとでっち Hitodetchi) is a child Tamagotchi character that debuted on the Keitai Kaitsuu Tamagotchi Plus in Japan and the Tamagotchi Connection Version 2 internationally.

Hitodetchi looks like an orange starfish, with darker orange around the edges and lighter orange in the center.

This highly active little Tamagotchi is soft, flat, and forever reaching for the stars.

Hitodetchi will always appear in the first generation. In subsequent generations, Hitodetchi appears if the parent Tamagotchi has less than 50% Training. It sleeps from 8PM to 9AM.

Hitodetchi will always appear in the first generation. In subsequent generations, Hitodetchi appears if the parent Tamagotchi has less than 50% Training. It sleeps from 8PM to 9AM.

In the first generation, Hitodetchi or Marutchi will appear. In subsequent generations, Hitodetchi can appear if the parent Tamagotchi has less than 50% Training. It likes to eat Pineapples, and it dislikes French Fries.

Hitodetchi is one of four gender-neutral child characters evolving from Tsubutchi. It is most likely to evolve into an Ura Mame family teen, but it can also evolve into an Ura Meme family teen with two or more care mistakes. It also appears to have a very small chance of evolving into an Ura Kuchi family teen. If one of its parents were Oyajitchi or a universal group adult, giving Tamatchi good care will cause it to evolve into Hashitamatchi or Hikotchi if it is a boy, and Ichigotchi or UFOtchi if it is a girl. Its favorite food is the pear, and it dislikes bananas. It sleeps from 8 PM to 9 AM.

Hitodetchi is a female child, evolving from Shiropetitchi. It can evolve into Chamametchi with good care, Ichigotchi with average care, or Ringotchi with bad care. Its favorite food is fruit.

Hitode is Japanese for "starfish". 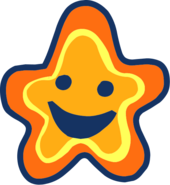 Hitodetchi sad
Add a photo to this gallery
Retrieved from "https://tamagotchi.fandom.com/wiki/Hitodetchi?oldid=101265"
Community content is available under CC-BY-SA unless otherwise noted.