Hoshi (ほし) translates to star, and gāru (ガール) is a Japanese pronunciation of girl; therefore, together Hoshigirltchi translates to Stargirltchi. She is named this because of the stars on her hood. Her name may also be a reference to the Japanese term hoshigaru, which means "to wish for".

Hoshigirltchi has light pink skin, with blue eyes, and yellow "hair" that points down her forehead. She wears a large pink star hood with cutouts for her yellow hair in two buns, a yellow dress, and red stockings. Hoshigirltchi often carries around a pink tablet which she uses to store information about her classmates.

Hoshigirltchi is a very energetic and talkative girl who loves to find the latest news and information about anything through rumors and gossip. She stocks all the information that obtained from her classmates in her tablet.

Hoshigirltchi can be obtained from any female teen by connecting to four or more friends of whom are all male, and having the Intelligence personality.

Hoshigirltchi evolves from any female teen with poor care (Nokobotchi with 5 or more Care Mistakes, Painaputchi with 4 or more, or Neotchi with 7 or more) and trained with a Social personality. If no personality is trained, the teen will have a 33% chance of becoming Hoshigirltchi.

Hoshigirltchi is obtained by having any female teen win the Robotics class minigame at Dream School at least three times, and by taking generally bad care of her through achieving a significant amount of care misses. The female teen must retain the Robotics icon, as winning 3 times in any Dream School minigame will change their icon and future evolution.

Hoshigirltchi was a monthly guest on the app in June 2020 and 2021 that could be married. On the Japanese version of the app, she stayed until September 2020. Her body type, made clear by the yellow dress and red tights, give her likes and dislikes to her My Tama descendants.

Her favorite meals are:

Her favorite snacks are:

Her favorite accessories are:

*Lemon Pie is a colorant. Feeding three in a row turns any Tamagotchi yellow.

Hoshigirltchi is a student at Dream School, and is in the Robotics class with Mametchi, Nandetchi, Righttchi, and Himespetchi. She is also in a band, called Pretty Princesses. She plays the electric guitar on a Smapi.

In "Icy Confrontation? Fiery Battle of the Robot Department!", during the robot demonstration, she shows off one of her inventions, Aritchi, an ant-like robot that's so small that it can only be seen by a magnifying glass. She loses track of it, and it ends up damaging Nandetchi's robot, which causes it to malfunction and encase all of Dream School in ice. In the aftermath, she finds Aritchi frozen in a block of ice. 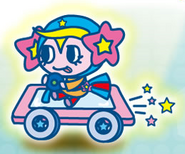 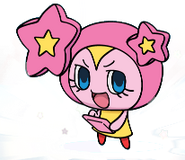 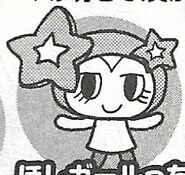 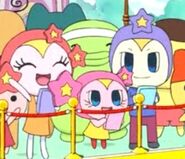 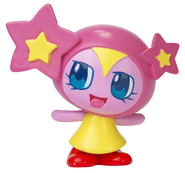