Male:
Ichirinshatchi (いちりんしゃっち Ichirinshatchi) is a male Tamagotchi character who debuted in Tamagotchi! Yume Kira Dream. He is a member of the Tama Star Circus.

Ichirinshatchi has a bean-shaped beige body. He has five different colored balls on top of his head, shaggy bangs on his forehead, and three pink stars on his left side. His eyes are small and round with brown irises. He stands on top of a red unicycle.

According to the Tamagotchi Friends Friendship Map, Ichirinshatchi "gets hopelessly lost off his unicycle".

Ichirinshatchi was one of the seven Spring 2019 marriage candidates available to all regions from the Meets Station. Though he's no longer available, his genes are still in circulation in the Tamagotchi ON App. Curiously, his eye genes appear to be a placeholder and/or an error preventative when a My Tama's eye genes conflict or cancel out. It is unknown why this is.

Ichirinshatchi makes a cameo in the final episode with the other Tama Star Circus members. 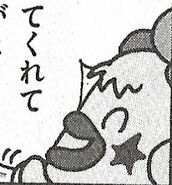 Add a photo to this gallery
Retrieved from "https://tamagotchi.fandom.com/wiki/Ichirinshatchi?oldid=96173"
Community content is available under CC-BY-SA unless otherwise noted.