Male:
Jaanoumetchi (ジャノウメっち) is an elderly male Tamagotchi character who debuted in episode 4 of Tamagotchi! Miracle Friends. He is voiced by Yasuyuki Kase.

Jaanoumetchi is white with small brown eyes, a scruff of gray hair, and a bushy gray mustache. His "ears" resemble sewing spools; one with blue thread, and one with red thread. He wears a light blue sleeveless shirt under a blue vest, as well as an orange bowtie, orange apron, and brown pants.

Jaanoumetchi is a craftsman who builds sewing machines. He travels around Tamagotchi Planet on his Giraffetchi, and his dream is to create the best sewing machine in the world. He is the Tamagotchi who originally built Madamtchi's sewing machine, which was bought by her father when she was a child. He is also the only one who could fix it when it was broken.

Jaanoumetchi loves oranges. When he visits Music Cafe, he orders orange juice, orange parfait, orange cake, and orange pudding. He also likes mirin. He ends all of his sentences with "jaano".

Jaano means "well then" and stems from the fact that he uses this phrase in every sentence. 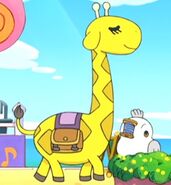 Jaanoumetchi's Giraffetchi
Add a photo to this gallery
Retrieved from "https://tamagotchi.fandom.com/wiki/Jaanoumetchi?oldid=97138"
Community content is available under CC-BY-SA unless otherwise noted.