The Jordy x Tamagotchi (죠르디 다마고치) (ジョルディのたまごっち) is a licensed Tamagotchi Nano model exclusive to South Korea, based on the NINIZ mascot character Jordy. It was teased on Bandai Korea's Instagram[1] before being officially revealed on November 27, 2020. This marks the first time a Tamagotchi has been exclusive to Korea.

The Jordy Tamagotchi uses the standard Tamagotchi Nano mold, and uses the ball chain design first introduced with the Evatchi.

After the user sets the clock, Jordy will appear and thaw out of a glacier for the user to care for. Jordy is a career-oriented dinosaur, and will change forms depending on how he's trained, reflecting him taking on part-time jobs, with 19 possible forms. However, should Jordy undergo severe neglect, he may lose his part-time job and regress back to his original form.

There are no on-screen icons, and therefore all information is conveyed through the screen and buttons. Jordy is cared for by filling his meters; he has Hungry and Happy meters, each consisting of four units, which are both empty when Jordy is born. If either becomes empty, he will call for attention to fill them.

If Jordy needs something, the user can press the C button for an animation to see what he needs. If Jordy looks glum and shows a dizzy spiral, he is hungry. If he cries and shows a sulking mark, he's unhappy. If neither meter is empty but the Happy meter is not full, Jordy will perform a Close Up. If neither meter is empty and the Happy meter is full, Jordy will wag his tail and then hold up a rose.

Pressing the A button opens the main menu, with the options to feed or to play the games. The meal option (triangle kimbap) fills one Hungry unit, and will refuse to eat anymore once the meter is full. The snack (apple) fills one Happy unit, and can be fed even when the Happy meter is full. The A button is also used to open the lights on and off menu when Jordy has fallen asleep. Jordy sleeps at 10 PM, wakes at 7 AM, and will turn on the lights himself.

The Jordy Tamagotchi has a total of six games, and each one can impact which part-time job Jordy takes. Winning a game will fill one Happy unit, while a perfect game will fill two Happy units.

Throughout the day, Jordy will leave poo on the screen. Pressing the A button will clean the poo away. If left for too long, Jordy may leave multiple poos on the screen. When poo is on the screen, cleaning it takes priority over all other functions; therefore, Jordy cannot be fed or played with until the poo is cleaned away. Poo cannot be cleaned when Jordy is asleep.

If the user fails to fill the Hungry and Happy meters, and allows poo to accumulate on the screen, Jordy will sulk, depicted by him crying with four lines at the top right of the screen. The player must press A twice to cheer him up. The user will not be able to feed him, play games, or clean his poo until he is cheered up, and he can't be cheered up when he is asleep.

Throughout the day, Jordy will be shown performing various activities, such as reading, napping, or drinking. The animations are cosmetic and do not impact evolution.

Jordy does not die; instead, he will leave on his own 72 hours after he's born, and which ending screen is achieved is determined by how well he's cared for.

In both cases, pressing A and C together will start the cycle over. 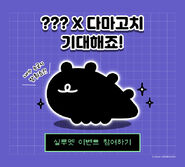 Teaser image prior to the announcement. 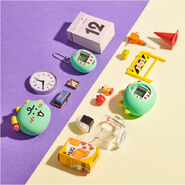 The Jordy virtual pet seen in the Iab Studio video, hinting the collaboration.