In the anime, she is voiced by Akiko Kawase.

Julietchi is light yellow with puffy white hair that resembles an afro hairstyle. Her hair is covered in seven hexagonal jewels; two are blue, two are green, two are yellow, and the one in the middle is pink. Her eyes are sparkly and green, each with one main highlight and three small highlights. She wears a two-layered frilly dress.

Julietchi is very emotional and trustworthy, and is passionate about acting. She is skillful at crying while acting and her tears sparkle like jewels. She is friends with Furifuritchi, but she doesn't like it when Furifuritchi criticizes the other students such as Kiraritchi.

Julietchi evolves from Nokobotchi with 3-7 Care Mistakes and trained with a Charisma personality.

Julietchi can evolve from any female teen with excellent, but not perfect, care (Nokobotchi with 1-2 Care Mistakes, Painaputchi with 1, or Neotchi with 4), and trained with an Active personality.

Julietchi could only be obtained on the Tamagotchi 4U if she was downloaded from a touch spot.

Julietchi goes to Dream School and is in performing class with Yumemitchi, Kiraritchi, Furifuritchi and Knighttchi. She dreams of becoming a dramatic actress, and practices every day. She often tests her skills on people (with tears) which impresses her teacher Mr. Micchi.

In an episode of the anime, Tamagotchi! Yume Kira Dream, she could not produce tears and was very miserable. Yumemitchi and Kiraritchi try to find a new way to make her cry with tears of laughter.

Julietchi is also a member of a band, called Pretty Princesses. She plays the piano.

The only known member of Julietchi's family is her mother. The name of Julietchi's mother is unknown, but she appeared in one episode of the anime. She has lighter skin than Julietchi, a beehive-like hairstyle with three tufts on her forehead, a yellow mouth, and a low-necked white dress with two pink stripes.

Jewelry Princess (ジュエリーひめ Juerī hime) is a transformed version of Julietchi available on the Tamagotchi P's via the Royal Change Tama Deco Pierce. She has a large princess crown and feathered fan, wears a fancy dress, and is surrounded by jewels and sparkles.

Juliepigmontchi (ジュリエピグモンっち Juriepigumontchi) is a Tamagotchi x Ultraman collaboration character. It was made to promote Tamagotchi's 17th anniversary. It looks like a Tamagotchi-style Pigmon from the Ultraman franchise covered in white fluff and jewels, similar to Julietchi's hair.

Duck Julietchi was created by a fan, and was the winning Julietchi design in a transformation contest. It was then featured in a poll to determine which transformations would be available on the 17th Anniversary Tama Deco Pierce, but it did not win. It is Julietchi in a duck costume on a pond with other ducks. She also has orange hair with yellow ducks and raindrops instead of jewels.

Julietchi's name is a mix of both the name Julie/Juliet, and Jewel (ジュエル Jueru), referencing the jewels on her head and her jewel-like tears. 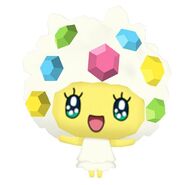 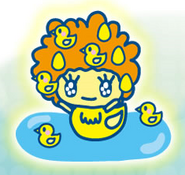 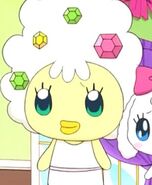 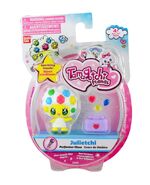 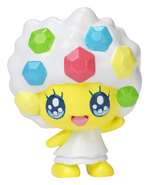 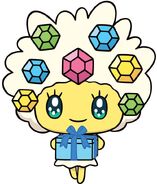 Add a photo to this gallery
Retrieved from "https://tamagotchi.fandom.com/wiki/Julietchi?oldid=95786"
Community content is available under CC-BY-SA unless otherwise noted.