Jyooubatchi (じょおうばっち) is a female parent stage character that debuted on the Tamagotchi Connection Version 5 Celebrity.

She looks like a yellow bee dressed as a queen. She has curly antennae and a yellow crown on her head. She has blue wings, wears a red cape, and has a fluffy white collar around her neck

A Tamagotchi that constantly craves honey. It always asks for a "Sip of honey, please♪?" Because it is so charming with its puppy-dog eyes, everyone obeys it.

Jyooubatchi is a parent-stage character that evolves from Princess Tamako or Anesantchi upon marriage. Memetchi evolves into her on the Japanese version; on the English version, she evolves into Mememamatchi instead.

Jyooubatchi is a NPC that can be interacted with (but not married) at the Flower Garden location. She will also appear in the animation that plays when the location is unlocked, escorting the user's Tamagotchi there.

Jyooubatchi could be seen on the Celebrity Cruise ship in Tama & Earth EXPO, where she was depicted as having the ability know to play the trumpet. A player could help Jyooubatchi play her trumpet in the Concert Master game.

Her name is a play on the Japanese word jyooubachi (johubachi) which means "queen bee". A queen bee is the leader of a bee colony, but in Jyooubatchi's case she actually looks like a queen. 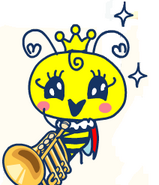 Jyooubatchi with a trumpet.
Add a photo to this gallery
Retrieved from "https://tamagotchi.fandom.com/wiki/Jyooubatchi?oldid=96848"
Community content is available under CC-BY-SA unless otherwise noted.