Karakutchi (からくっち Karakutchi) is a male adult character who debuted in Tamagotchi! Yume Kira Dream. He appears as a raisable character on the Tamagotchi P's and Tamagotchi Friends: Dream Town Digital Friend.

Karakutchi has a red, oval-shaped body with short arms and legs. His eyes look like half-circles with the flat side on top, and he has large circular pupils. In the anime, he is depicted with red irises. He is usually smiling, and his mouth curls up at the edges. There is a long, green stem on top of Karakutchi's head. He also has a glob of red sauce on top of a glob of yellow-orange sauce on his head. The sauces run down the sides of his head and over his forehead.

Karakutchi loves cooking and takes it very seriously. He can be very competitive, such as when he tried to beat Kuchipatchi in a cooking contest. Occasionally he can get into arguments about cooking as well. He is pleased when other Tamagotchis taste his cooking. He loves spicy food, and sometimes his recipes are too hot for other Tamagotchis' tastes.

Karakutchi has a younger twin sister named Amakutchi. He is very fond of her and sometimes makes recipes based on her. However, sometimes he dotes on her too much, which makes Amakutchi embarrassed.

Karakutchi is obtained from Cosmotchi with strength and gourmet attributes, and 3-7 care misses.

Karakutchi appears as a recurring character. He is in the cooking class at Dream School.

Karakutchi appears as a minor character.

Karakutchi's is a pun on karakuchi (辛口), which translates to hot, spicy, salty, or dry-tasting. 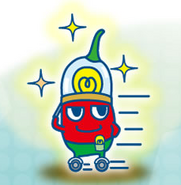 Add a photo to this gallery
Retrieved from "https://tamagotchi.fandom.com/wiki/Karakutchi?oldid=93330"
Community content is available under CC-BY-SA unless otherwise noted.