Male:
Kikitchi (ききっち Kikitchi) is a male adult stage Tamagotchi character who debuted in the second Tamagotchi movie, Tamagotchi: Happiest Story in the Universe!. His first virtual pet appearance was on the Tamagotchi Connection Version 5 Celebrity. Originally he was a teen character, but he has been an adult since the Tamagotchi iD.

Kiki (きき) is Japanese for "hear" or "listen", and Kikitchi is called this because he has a good sense of hearing. Kiki is also a Japanese onomatopoeia for the sound a monkey makes.

Names in Other Languages

Kikitchi resembles a baboon. His body is yellow, and his face is cream-colored. He has round ears, oval-shaped eyes, pink cheeks, and a cat-like mouth. He also has a pink heart shape on his rear like a baboon does. He wears a red scarf.

Kikitchi is often very stubborn, self-centered, and only listens to himself. He got this way after being bullied a lot as a child because of what he often heard with his big ears. No one would believe what he heard and would scold him for lying which left him without any friends. Kikitchi's parents were also very busy in running Celebria so they could not be around when he needed company. As a result, Kikitchi became bitter and rejected any attempts at friendship in fear of being bullied again.

However, Mametchi and friends manage to befriend him and show that they trust what he hears and care for him. Kikitchi's parents also promised to spend more time with him after seeing how their absence affected him. Thus, Kikitchi became more friendly though he still sometimes acts self-centered, saying what's on his mind without thinking how rude it sounds. His best friends are Chamametchi, Hapihapitchi and Imotchi, but sometimes he fights with Hapihapitchi. He also looks up to and admires Gozarutchi, even calling him "master". He became a very good skateboarder after Kuromametchi helped him too and may look up to him.

Kikitchi has phasmophobia, also known as a phobia of the paranormal world. He does not like scary stories and after hearing them from his friends, he became very paranoid of suspicious noises and shadows. In one episode, Kikitchi tries to conquer this fear by going into a scary forest at night with his friends. Kikitchi also has great athletic ability, being able to jump very high and from place to place in a short amount of time. He loves bananas very much, similar to a monkey.

Kikitchi often uses the words dashi (だし) and desho (でしょ) at the end of every sentence. Kikitchi sometimes uses the word nawake or na wake (なわけ) when asking a question.

His profile on the Tamagotchi Pix website states: "Kikitchi is sensitive and kind hearted, though a bit mischievous, too! He's also very athletic!"

Kikitchi is obtained from any male child with high Active training. Ahirukutchi evolves into him naturally, but Yattaritchi, Mousetchi and trained Ahirukutchi will all evolve into Kikitchi if their highest points are in Active.

Kikitchi evolves from either Kuribotchi or Kuchitamatchi and can appear in any generation with perfect care. Kikitchi's adult evolution is based on how well he is cared for at the end of thirty hours (one day plus six additional hours). He sleeps from 8:30 PM to 7 AM.

Kikitchi is obtained from Monapatchi with 4+ care mistakes. He is the worst care character in this version.

Kikitchi is obtained from any male teen with good care.

Kikitchi is obtained from any male teen with 6 care misses or by playing with the Scooter toy 10+ times. He is the second worst care character in this version. As an NPC, he is available internationally at the Tama Hotel in the Fairy and Magic versions, as well in as the Japanese exclusives Pastel and Sanrio. He also appears in the Fantasy version, in Arabian Night instead. His favorite items are:

Kikitchi is obtainable as a raisable character on the Tamagotchi Pix. He can be obtained from a blue egg with 4-5 care mistakes.

Kikitchi made his first appearance in the movie Tamagotchi: Happiest Story in the Universe! as one of the main characters. He appeared as a reocurring character in the first few seasons of Tamagotchi! and later made minor appearances in GO-GO Tamagotchi!. He attends Tamagotchi School and is in Chamametchi's class.

When the Magical Flying Library Ship visits Tamagotchi School to allow the children to have adventures in its magical storybooks, Kikitchi is seen being unimpressed by the stories. Mametchi notices this and gets an idea to invent something that will allow him to share his happiness with Kikitchi so he won't feel bad. He ends up creating Hapihapitchi who has the power to absorb happiness and give it to others.

The next day, Mametchi and friends encounter Kikitchi at Celebria and invite him to join them, but he runs away. After a chase through Celebria, Hapihapitchi uses her happiness power on him, but it doesn't work. Kikitchi becomes angry and snaps at Hapihapitchi, saying that she can't force people to be happy and that her power is nonsense. Later at night, Kikitchi remembers a childhood memory. On the day before a big festival, Kikitchi heard a tree saying that it would rain the next day. When he tells the nearby children of this, they gang up on him and call him a liar as they didn't hear the tree's voice and don't want the festival to be canceled.

The Magical Flying Library Ship visits again the next day and Kikitchi hears a faint voice calling for help. He looks for the source and runs into Mametchi and friends who are also looking for the source of unhappiness Hapihapitchi sensed. The source is revealed to be from a book titled World's Happiest Story and everyone jumps in to investigate. They discover that the story loops instead of ending and run into Happy, the story's protagonist. Happy rejects their help in finding the ending and Kikitchi notices how unhappy he is and relates to him. When everyone leaves the story, Kikitchi secretly takes the storybook home with him.

At home, Kikitchi jumps into the book to help Happy, but this causes a magical paper tornado to engulf Celebria, The tornado turns everyone caught in it into paper and it's explained that the book is unstable from having it's ending torn out. Mametchi and friends go back into the storybook to restore the ending and rescue Kikitchi who is keeping Happy company. They eventually figure out the true ending of the book and Kikitchi realizes that happiness comes from feeling connected to people. He recovers the magic crayon so Sister Otogitchi can write the missing ending back in and the full story is restored, making the paper tornado disappear. When everyone returns to Celebria, Kikitchi introduces his parents to his new friends as his parents promise to spend more time with him.

He goes on a traditional adventure with Chamametchi and Imotchi on Tamaween in "Go Go! Tama Adventure!". He manages to make Kuchipatchi angry by accusing him of never making it to Pumpkin Soup Lake which makes him try to scare him later in Pumpkin Forest. Kikitchi helps the girls get down a steep cliff and reach their destination.

In "Kikitchi Can't Sleep!", Chamametchi and Imotchi have a sleepover at his house and are amazed at how luxurious his home in Celebria is. At bedtime, they both tell scary stories and Kikitchi is frightened to the point of falling over and feeling anxious over suspicious noises and shadows.

Kikitchi undergoes ninja training in "Kikitchi's Ninja Training" with Gozarutchi, Mametchi, and Kuchipatchi. He is at first unimpressed by Gozarutchi, even going as far to call Gozarutchi "not a very good ninja". He soon comes to respect him after Gozarutchi rescues him from being trapped on a kite high in the air and asks him to teach him how to be a ninja, asking if he can call him "master". However, Gozarutchi is overwhelmed by his enthusiasm and hides from him instead.

The Celeb Sisters (セレブ姉妹 Serebu Shimai) are Kikitchi's sisters and are well known celebrities, but their real name are unknown.

Lord Kikitchi is a character that Kikitchi plays in Princess Lovelin, a TAMAX-TV show where the setting is ancient Japan. He rules over Castle Town with Lady Chamametchi and is often sending others to look for Princess Lovelin who sneaks out into town.

Vampire Kikitchi is a character Kikitchi plays in TAMAX-TV's show, Vampire Mametchi. He is one of Vampire Mametchi's minions and he works together with Vampire Hapihapitchi to resurrect Mametchi from his sleep. Once Mametchi is awake, the three work together to attack the nearby Sisters so they can accomplish their goal of spreading evil on the world.

Kikitchi flying in a plane 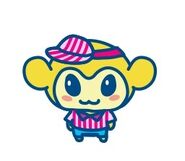 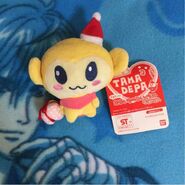