This article is about an upcoming Tamagotchi release, and therefore information is subject to change prior to release.

The Kingdom Hearts Tamagotchi is an upcoming licensed Tamagotchi Nano model based on the video game series Kingdom Hearts. It was announced on March 28th, 2022 and is set to release in Japan on October 2022.

Kingdom Hearts is a series of action role-playing games developed by Square Enix and owned by The Walt Disney Company that serves as a crossover between its own original characters and the latter's film portfolio. The series follows the protagonist Sora as he travels across worlds from Disney with Donald and Goofy. Their goal is to stop the Heartless, monsters born from darkness, from invading each world by sealing their keyhole and restoring peace. On the Kingdom Hearts Tamagotchi, the user is tasked with raising Sora and other characters while keeping them safe from heartless monsters.

The user begins with Sora who can evolve to different forms and characters based on the type of care received and games played. There are three minigames to play (Let’s Raise the Stone, Attack Pink Agaricus, and Press the Button Phil Tells You) and throughout the day scenes from the Kingdom Hearts series will play out on screen. Heartless monsters will also attack on occasion and it's up to the user to fight them off before they injure their character. 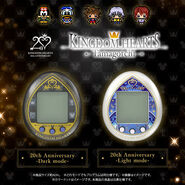 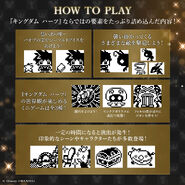 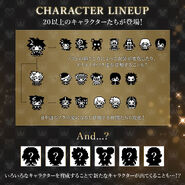