Kiramotchi looks like Kiraritchi, only without the hat. She is fluffy and white with one Lovelitchi-like ear, with two red beads on it. She wears a red dress with a pink button, white panties, and dark pink stockings. In the anime however, Kiramotchi has yellow panties, instead of white ones. This could possibly be due to her white panties making her look indecent.

Kiramotchi loves art. She is very mischievous and often has graffiti fits. She paints all over buildings, the ground, and even other Tamagotchis. When this happens, fire appears in her eyes. Whenever she gets in trouble for scribbling art everywhere, she often apologies by looking sad so that others will forgive her. It seems like she loves paint and uses it almost all the time.

Kiramotchi is obtained from Neotchi with the Style, Gourmet, and/or Strength traits and 0-2 care mistakes.

Kiramotchi is obtained with bad care and having the Active trait.

Kiramotchi is Kiraritchi's little sister, and lives with her and their mother at the Kirakira Tamamori Shop. She adds the phrase desumono (ですもの) to the ends of her sentences. 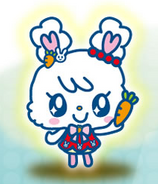 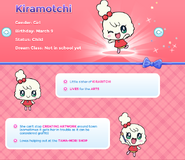 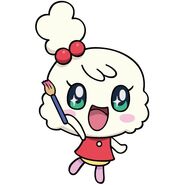 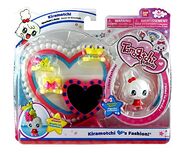 Kiramotchi struck by a sudden inspiration

Kiramotchi turning herself into a big banger sister 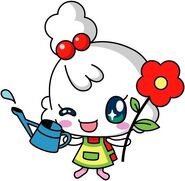 Retrieved from "https://tamagotchi.fandom.com/wiki/Kiramotchi?oldid=100189"
Community content is available under CC-BY-SA unless otherwise noted.