Kizunatchi resembles an animal fairy. She is very small, similar to the size of Hapihapitchi but can become even smaller when inside the Tama Profy. She has light pink fluffy costume-looking skin, a light yellow face, pink cheeks, purple eyes, two white butterfly wings, a Kizuna Tama Heart on the top right of her head, and in the middle of her tummy.

She also wears a yellow collar similar to Chamametchi, and has ears similar to Lovelitchi's.

In episode 143 of Tamagotchi!, Kizunatchi evolves with the bond of friendship as she falls from the sky, trying to save Tamagotchi Planet. Now, she wears a light yellow dress with a heart on it, has heart-shaped ears and a heart shaped face. Her wings are bigger and her collar turns pink. She no longer has the ability to enter the Tama Profys.

Kizunatchi is a popular Tama Pet on Tamagotchi Planet, and many Tamagotchis think she is cute and adore her. Since she is a young Tamagotchi, Kizunatchi can be childish. She is often very unusual and sometimes repeats a question when it is asked. She often ends her sentences with noja (のじゃ) and nanoja (なのじゃ). She is helpful and likes to do tasks for Lovelitchi's family. When she is excited, she flies back and forth or around in circles singing happily.

She is also a messenger for Hatokamitchi, the god of Tama Heart, along with Denshohatotchi who is a courier. Kizunatchi sleeps most of the day, and does not use make-up and doesn't like going to bed when she is supposed to.

When she refers to herself, she doesn't use "I" or "me", but she uses "Kizunatchi" instead. She sends messages digitally.

Kizunatchi was accidentally discovered by Lovelitchi on her Tama Profy after obtaining a Tama Heart and Hatokamitchi's power was used in the end of episode 102 on the anime TV show, Tamagotchi! in 2011. Originally, she stayed inside the Tama Profy until episode 109, in which an egg emerged from the Tama Profys and hatched into her. After that, she remained outside of the phones. In episode 143, she tries to fight over the curse but is overpowered and falls. As Mametchi and the others try to reach her, their hearts appear, surround Kizunatchi, and soon she begins to glows. As the light fades, it shows that Kizunatchi alive and evolved and with the power to bring the world and everyone back to normal. As everything returns back and the gang gets ready to leave (shown in Mametchi's flashback just after he thanked Kizunatchi, who was the only one not present), Kizunatchi tells everyone she must leave to return her original home to protect the hearts, much to everyone's surprise and sadness, hard to say goodbye to their evolved friend, but knew she had to do the right thing. As they all hugged her, Kizunatchi, saddened by the departure as well, promises to never forget them or their times together, and tells them she is sure they'll see each other again one day.

She is voiced by Mariya Ise.

Kizunatchi appears briefly in episode 50, singing Happy Happy Harmony with the others. She can be seen in her evolved form on Ha Island with Hatokamitchi, Denshohatotchi, Yumecantchi, and Fortune Teller.

Kizuna is the Japanese word for "connection", "friendship" or "bond". It means "The strength and depth of our work in that it signifies our connections with the love in our own hearts, with our creativity and intuition, with nature, and with other people that form the basis of our work." 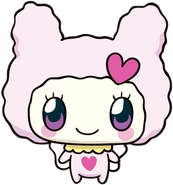 Kizunatchi pointing at a Tama Heart 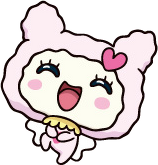 Add a photo to this gallery
Retrieved from "https://tamagotchi.fandom.com/wiki/Kizunatchi?oldid=102053"
Community content is available under CC-BY-SA unless otherwise noted.