Knighttchi has a gray head and body, and has blue eyes. On his head, he wears a large silver knight helmet, with a gold star above his visor and a bright red plume on top. He is never seen without his helmet. He wears a red cape that matches his helmet plume.

He is a chivalrous Tamagotchi, but his passion leads him to exaggerate sometimes. He considers his destiny is to become a hero when he grows up.

Knighttchi can be raised from Cosmotchi with two or less Care Mistakes, and is trained with Style, Charisma, and Gourmet personality elements. Additionally, he can evolve from either teen if they fully complete 20 games at the Game Center.

Knighttchi can be obtained from any male teen with perfect care (0 Care Mistakes with Maimaitchi or Bokuhoshitchi, up to 3 with Cosmotchi) and the user trains him to have a Gourmet personality. If no personality training is used, the teen has a 33% chance of becoming Knighttchi.

Knighttchi is a potential marriage partner that was available on m!x Stations in the spring of 2018.

Knighttchi is a potential marriage partner that was made available on Meets Station in the fall of 2019.

Knighttchi takes dance lessons at Dream Town, and dreams to become a male idol someday. He is in dance class with Yumemitchi, Kiraritchi, Jurietchi, and Furifuritchi.

Knighttchi is a member of the Rainboys music band. He plays the piano.

In GO-GO Tamagotchi! episode 40 part 1, he is one of the finalists in Lovelin's contest. During the dance judging segment, he almost falls off the stage, and is saved by Himespetchi (under her disguise Himeboytchi).

Naito (ナイト) is a Japanese pronunciation of the word knight. 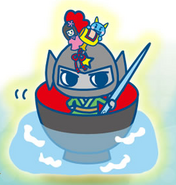 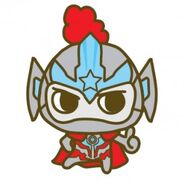 Knighttchi as a Dance clothes

Add a photo to this gallery
Retrieved from "https://tamagotchi.fandom.com/wiki/Knighttchi?oldid=101451"
Community content is available under CC-BY-SA unless otherwise noted.