Kodatchi (こだっち) is a male character who only appeared in episode 113 of the Tamagotchi! anime. He is a ghost who resides in Patchi Forest. A Moon Tama Heart appeared after he befriended Kikitchi.

Kodatchi is light blue with a fluffy head. He has two teardrop-shaped leaves as ears, which perk up when he is surprised or droop when he is sad. He wears an orange vest and he has large, circular eyes with tiny pupils. He is small compared to the average size of a Tamagotchi, and is even smaller than Kikitchi.

Kodatchi is a mischievous and child-like character who likes to have fun. He enjoys sliding on frozen lakes and riding on swings. When Kikitchi encounters him in the forest, Kodatchi wanted to play but Kikitchi is too busy trying to overcome his fear of ghosts and the dark. Kodatchi tended to be demanding and gets very upset when he is left alone, until Kikitchi came back to play with him. The two of them later become Tama-Friends and then Kodatchi smiles before fading away, causing Kikitchi to be terrified upon the realization that his new friend was a ghost. 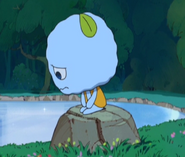 Kodatchi disappearing
Add a photo to this gallery
Retrieved from "https://tamagotchi.fandom.com/wiki/Kodatchi?oldid=93033"
Community content is available under CC-BY-SA unless otherwise noted.