Konenetchi has medium pink skin, pink cheeks and oval-shaped eyes which have turquoise irises in the anime. She wears a dark pink dress with a yellow clover-like design on the front and white lace trim on the bottom, and light yellow stockings. She has two ears or buns with two dark pink beads on either side of her head. She has curly bangs on her forehead, and two hairs sticking up on top of her head.

Konenetchi is friends with Lovesoratchi and Tsuyotchi. She often joins them during playdates. She also goes to the Tama Sitter House daycare. She is more outgoing than her two friends, and she has a precocious personality.

Ko means "young" and nene is an interjection used to grab someone's attention. 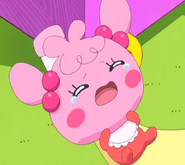 Add a photo to this gallery
Retrieved from "https://tamagotchi.fandom.com/wiki/Konenetchi?oldid=99494"
Community content is available under CC-BY-SA unless otherwise noted.