Unclear gender:
Kuchitamatchi (くちたまっち Kuchitamatchi) is a character who debuted on the original Tamagotchi, and would later appear on the V3, V4.5, and Tamagotchi Music Star. In classic form, Kuchitamatchi is a teen character with no defined gender; however, his interpretation in the modern era has him as a child character, and was later made male-only.

Kuchitamatchi resembles a round, orange ball with eyes and a large beak. In the Tamagotchi L.i.f.e. app, there is data for light pink and blue variations, but there is no way of obtaining them.

Kuchitamatchi is an adolescent Tamagotchi which isn't so well cared for. He can be a little mischief maker at times. This Tamagotchi is always kind and gentle.

The Nintendo Power guide to the Tamagotchi Gameboy game stated: "Mellow and easy-going, Kutchitamatchi isn't demanding, but it's not ambitious either. Some extra tutoring will be required to develop its IQ."

Kuchitamatchi is a gender-neutral child that can appear on any generation, except the first, if the parent from the previous generation was from above-average care or better with high discipline. It is a healthy child, along with Mohitamatchi. Kuchitamatchi sleeps from 8 PM to 9 AM, likes cherries, dislikes hamburgers, and has a base weight of 10 LB.

Kuchitamatchi is a male child that evolves from a male Petitchi with moderate to poor care. The other better care child is Kuribotchi. It can further evolve into Kikitchi with good care, Hinotamatchi with average care, or Nonopotchi with bad care. Kuchitamatchi sleeps from 7:45 PM to 7:30 AM. 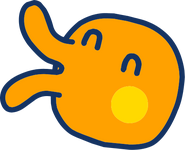 Sad
Add a photo to this gallery
Retrieved from "https://tamagotchi.fandom.com/wiki/Kuchitamatchi?oldid=91471"
Community content is available under CC-BY-SA unless otherwise noted.