This article is about the modern character. You may be looking for the Hoshi de Hakken character of the same name.

Male:
KuroMametchi (くろまめっち Kuromametchi) is a male adult Tamagotchi character who debuted on the Tamagotchi School in Japan, and the Tamagotchi Connection Version 5 internationally. In almost all releases he appears in, he is obtained with perfect or near perfect care, usually on par or slightly lower than Mametchi.

Kuro (くろ) meaning "dark" or "black". However, it is also manga slang for a bad guy; 'black hat', which could be a pun about the fact that KuroMametchi looks like he has a black hat. Kuromame also means black soy beans.

KuroMametchi has a slightly similar appearance to that of Mametchi. However, his skin is grey, and his ears are pointy and black instead of dark blue. Also, the brows of his eyes are pointed downwards, giving him a harsher expression. He has rosy cheeks. His body is black and he wears pink scarf around his neck. He has a pink 5-point star tattoo on his left ear and three silver round earrings on his right ear. He is usually seen smirking, although sometimes he has a more serious expression.

Bandai's official description of KuroMametchi describes him as a "lone wolf" character. He's highly intelligent and not a bad person, although he can be rather unsociable. KuroMametchi always has a cool and rational outlook, and is popular in his class. He was once believed by the class as Mametchi's rival but he thinks of him as a friend. Surprisingly, he isn't good at dancing. He is skilled at sports, especially soccer and skateboarding. He also loves music, and owns an electric guitar.

KuroMametchi also seems to have a competitive side. When the school had a team contest on the short Tamagotchi anime, Let's Go! Tamagotchi, Mametchi raced against KuroMametchi. Makiko is a fan of him because of his "coolness" since he is a lone wolf and hard-to-get. Although Ringotchi feels the same way she's afraid of her Mametchi Fanclub, which Makiko is in. KuroMametchi has a heroic side to him as seen in the anime. In the eighth "Let's Go Tamagotchi!" episode, he helps (and hurts) Bikertchi by mailing Bikertchi's love letter to Ciaotchi.

KuroMametchi also has a bit of a soft side. In Tamagotchi Corner Shop 3, Makiko says that he is kind to the elderly. This is proven in episode 12 of Let's Go! Tamagotchi where he has a dream where he carries Otokitchi across the road. In Tamagotchi: The Movie, it is seen that Kuromametchi cares about Mametchi such as when he came up with the plan to save Mametchi and Tanpopo falling from the building. Also in the movie, Kuromametchi is the first to shout for Blackholetchi to wake up when Mametchi and Tanpopo are going to be sucked inside.

His official profile on the Tamagotchi Pix website states: "Kuromametchi is a cool Tamagotchi character. He's good at sports with football being his favorite. He's very competitive so if you're playing against him, watch out! Though outside of sports, he's very friendly!"

KuroMametchi evolves from any male teen with perfect care.

KuroMametchi evolves from any male teen with perfect care. There is a 50/50 chance of the teen evolving into him or Mametchi.

Kuromametchi is a special character released with the Love and Melody Deco Pierce. He is obtained by winning the TV-Catch game exactly three times with any male teen.

Kuromametchi evolves from either Pokapokatchi or Fuyofuyotchi with 10 or more "Sport" skill points and 0-4 care mistakes.

Kuromametchi can evolve from any male teen in the first generation. He evolves after making 2-3 care mistakes and can also be obtained by feeding 3+ Rice Omelets to any male teen. He can be talked to, befriended, and married at Tama Sport Plaza. His favorite items are:

Kuromametchi is obtained from a male teen born from a blue egg with 2-3 care mistakes.

KuroMametchi lives in what looks to be a garage. He is one of the many Tamagotchis to have had a crush on Lovelitchi. He is one of the only Tamagotchis whose initial affections for her remained throughout the series. He knows a lot about her, and he has posters of her all over his walls. He is the leader of Lovelin's cheering squad, joined by Togetchi and Hinotamatchi. He gets along well with Shoototchi and Sunopotchi because of their shared love for sports.

He is one of the only tamagotchis to know of Lovelitchi's secret identity before she revealed herself in "Listen! Lovelin's Confession" and went as far as dressing up as her in "In Hot Pursuit of Lovelin!" to throw Uwasatchi and Spacytchi off her trail. He will also do his best to help Lovelitchi, such as when he wanted to be her skating partner in "A Sparkling Debut! Lovelin's Skating Lessons". In "Decisive Moment! Photo Contest", KuroMametchi had a moment of infatuation while secretly taking a photo of Lovelin for a photography contest.

He has a main role in "Kuromametchi Finds His Coolness" where he fears that he lost his coolness after hearing the Eco-usatchi Triplets talk about his embarrassing pursuits from previous episodes. He goes on a journey to be cool again and after encountering Morikamitchi he learns that he doesn't have to completely act like a lone wolf or rush to act cool.

In "Oh! Tama World Cup" he becomes very excited over Forwardtchi, a popular soccer player, coming to Tamagotchi School to play soccer with his class. He tries to tries to train his friends so they can play well against Forwardtchi, but they're unable to get anywhere so Kuromametchi trains by himself. At the actual match, Kuromametchi manages to steal the ball in the second round and score a goal. This impresses Forwardtchi who takes him to the Tama World Cup as a guest. In "Clash! Waiwai Hockey", he makes it to the final round of Waiwai Hockey after beating Mametchi. However, he is easily beaten by Necktietchi who is the grand champion of the game and takes home the trophy.

In "A Rival's Bond", Tomomi becomes popular at Tamagotchi School due to her studying and sports skills, causing Kuromametchi to see her as a rival. By the end of the episode, they form a special bond and the Kuromame Tama Heart appears.

In GO-GO Tamagotchi!, he attends DoriTama School. In addition, the newcomer Neenetchi has a crush on him, and her little brother Orenetchi idolizes him. In contrast to Mametchi and Himespetchi, he appears to be aware of Neenetchi's affections, but chooses to ignore them. However, in "Shining Smiles! Happy Tamaween", he willingly dances with her during the Halloween party. Kuromametchi starts a soccer team in My Turn! DoriTama Eleven and recruits other Tamagotchis who are interested and like playing soccer. The eventually team faces off against a team from TamaGoLand in "Fierce Fight! World Tama Cup". After a fierce match, Kuromametchi's team wins and earns a trophy.

Detective Kuromametchi is a role Kuromametchi plays in the TAMAX-TV show, Princess Lovelin. He is often tracking down criminals in the town with Ringotchi and Mimitchi. However, Mametchi no Suke often defeats the criminals before the detectives find them.

Metal Kuromametchi is Kuromametchi's Henshin Jo transformation on the Tamagotchi iD L. He is dressed up as a rock star and keeps a metal guitar with him. He has appeared in the anime in the episode "Don Transform! Henshin Jo / Unite! Three Hell Devil Sisters".

Count Kuromametchi is another one of Kuromametchi's Henshin Jo transformations that appears on the 15th anniversary version of the Tamagotchi iD L. They are dressed up as a vampire, wearing a long cape and being accompanied by bats.

Kuromame Senpai is Kuromametchi's Personality stage form on the Tamagotchi 4U and 4U+. He has a slender form that is human-shaped and they are surrounded by sparkles. This tall, tough version of Kuromametchi is said to only happen when he want to be on his A-game to help guide someone important to him. Or maybe this is an idealized form imagined by a fan. He is obtained by connecting to an Orenetchi on another 4U device. Kuromame Senpai has appeared in GO-GO Tamagotchi! in multiple episodes, usually in imagine spots by Orenetchi or through Neenetchi seeing him as the form.

OtaKuromame is Kuromametchi's other personality stage form on the Tamagotchi 4U and 4U+. The form depicts him as an Otaku obsessed with Lovelin. Kuromametchi is a big fan of Lovelin, and he's good at keeping calm about it...usually. But when his fan behavior reaches a fever pitch, he mutates into this form, completely nerding out. He is obtained by talking to Lovelin at the park. The form is reverted by not talking to Lovelin for two days.

PapaKurotchi is Kuromametchi's father. He has only been seen in virtual pets as an evolution of Kuromametchi and in family photos in the m!x and On. 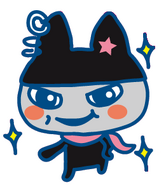 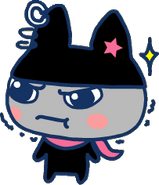 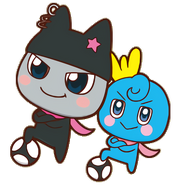 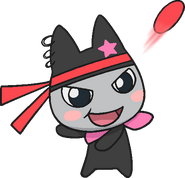 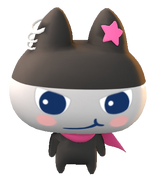