You Got Me! Octodogtchi's Secret!

Today is Tama-Bean Day! According to Mametchi's parents, they must throw a certain number of beans in order to suck up all the bad energy and expel them. If they mess up the ceremony, something terrible will happen!

Papamametchi and Mamametchi are carefully picking at tama-beans when they are interrupted by Mametchi and Chamametchi running inside the house. Mametchi notices the beans and notes that it must be the Tama-bean festival today. The parents state the importance of the ceremony and explain they must count the exact amount of Tama-beans collected to expel the evil; if they make a single mistake it will cause "a terrible thing to happen". The siblings freak out and their father asks them to change into their ceremony clothes.

Everyone starts picking up the beans and it's explained to Hapihapitchi that the beans have absorbed the negative energies and should be put away. Eventually, everyone but Mametchi has finished who is still collecting beans in his room. He reaches for a bean behind some books, but Hapihapitchi distracts him with another bean she collected for him. After grabbing two more beans on the floor, he concludes that he got all of them. Unfortunately, one bean is left hiding behind the stack of books. He rejoins the family downstairs and Mamametchi says everyone can now relax.

A week later, at nighttime, the forgotten bean begins to sprout and grow at an alarming rate. It topples Mamaetchi's bed over, waking him up. He looks out the window and is surprised to see a giant stalk growing out of his room. At morning, the neighborhood is surrounding the house and Lovelin is at the scene reporting on the grown tree. Interviewing with Papamametchi, he replies that he's working with laboratory to investigate the tree and that the tree will continue to grow. Mamametchi asks the family if they actually collected all the beans and Mametchi remember the one beans he forgot to get because he got distracted by Hapihapitchi. Realizing he miscounted, he becomes determined to cut the tree down. He flies at it with an ax, but bounces off. He then uses his remote controlled mini-excavator to dig up the roots, but after a few hours the excavator completely disappeared in the hole with no change to the tree.

ADtchi passes Lovelin a notice which she reads: The tree has grown so much that Tamagotchi Planet is now itchy and trying to scratch at its back. However, its stubby arms can't reach the itch. Mametchi tries to think of what to do and ends up imagining the tree enveloping the planet completely. He falls to the ground in shock and Lovelin reports that nobody knows how big the tree will grow and that investigation is still ongoing. She spots flowers at the top of tree and their petals fall off. The tree then begins to wilt, revealing its lifespan to be a day. Big square pods begin to grow larger until they pop and release a shower of Tama-beans. Lovelin catches one and smells it, noting that it has a sweet aroma like a fruit. A neighbor picks one off the ground and eats it, delighted at how sweet it tastes. The surround neighbors then climb over the fence to eat the beans that have fallen in the front yard as Mametchi and Lovelin also taste the beans. The remaining pod pops, releasing even more beans and causing a giant pile up of them.

After the shower stopped, everyone is shown halfway buried in the beans which have completely flooded the area around Mametchi's house. Lovelin states that the shower was only in Tamagotchi Town so the planet is completely safe. The neighbors leave the area, feeling sick from eating too many beans and the TV crew drive away. Mametchi says he doubts anything can get worse, but his parents say that this is only the beginning of the problem, confusing the kids. The next morning, the family sits in the living room in dismay eating beans. Papamametchi says they must eat all of them in a week or else a new giant tree will sprout again. Mametchi is exasperated and complains that there's too many as they are surrounded by crates piled high with beans and there's still giant piles outside the house. 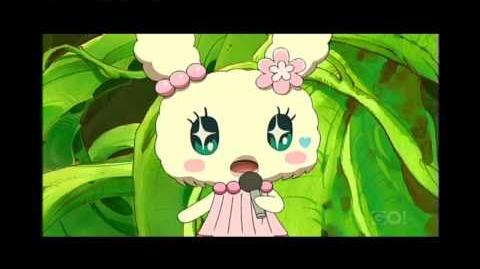 Retrieved from "https://tamagotchi.fandom.com/wiki/Let%27s_Celebrate!_Tama-Beans_Festival?oldid=103260"
Community content is available under CC-BY-SA unless otherwise noted.