Lovezukintchi was present in the 15th Anniversary Character Poll as a female adult candidate.

LoveZukintchi is pink with a yellow, heart-shaped mouth and pink body. She has large eyes with three eyelashes on each, and her head is covered by a big blue hood decorated with small white hearts. In Tamagotchi: Happiest Story in the Universe!, she also appears to have dark blue irises.

She is shy and timid but has a single-mindedness that makes her very bold sometimes. She blushes easily and uses her hood to hide it.

LoveZukintchi makes her first true pet appearance on the Tamagotchi Connection Version 5. She is a Smart Family group character, evolving from using Smart items while keeping bonding percentage between 0 and 20. When she marries, she becomes Mamametchi.

LoveZukintchi returns on the Tamagotchi Plus Color. She appears on odd generations and can evolve from any female teen character with 1-3 care mistakes.

Her special item is the Storybook. When she uses it, she improvises the Little Red Riding Hood fairytale; her hood turns red, and a Gotchi King Servant appears wearing a wolf costume.

LoveZukintchi appears as a minor character in Tamagotchi: Happiest Story in the Universe!.

LoveZukintchi's name is a combination of the English word "love" and the Japanese word "zukin"(ずきん) means hood, referencing the heart-pattern hood she wears.

LoveZukintchi with HotTeatchi, from Tamagotchi: Happiest Story in the Universe! 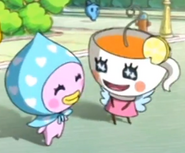 LoveZukintchi and HotTeatchi smiling
Add a photo to this gallery
Retrieved from "https://tamagotchi.fandom.com/wiki/LoveZukintchi?oldid=90171"
Community content is available under CC-BY-SA unless otherwise noted.