Female:
Lovelin (ラブリン Raburin) is the stage name of Lovelitchi. She is a popular female Tamagotchi idol from the Tamagotchi! anime series. She and Lovelitchi are both are voiced by Kei Shindou.

In virtual pet franchises, Lovelin is only raisable on the Tamagotchi iD Lovely Melody ver. She can also be found on the American Tamatown/Music City as 'Lovelitchi Outfit 5'.

Lovelin is Lovelitchi's alter-ego working in the entertainment industry of TAMAX-TV. She works as an actress, singer, and news reporter. She is also Gotchiman's sidekick in his TV show, GOTCHIMAN. Lovelin also has many shows of her own, like The Lovelin Show and her 30 Seconds Cooking Show. She is mainly known as Tamagotchi Planet's "super idol."

The reason Lovelitchi has two identities is because she leads a secret double-life. There is Lovelitchi, who is a shy, kind girl. Then there is Lovelin, who is a fun, outgoing, active girl who thinks before she acts. This is why other characters do not see that Lovelitchi is really Lovelin. But only her family, friends and everyone at Tamagotchi School know the truth about Lovelitchi and her secret identity. However, Uwasatchi also knows the truth, but she doesn't believe she is Lovelin, as she thinks it's only a joke or just made up gossip.

As far as her popularity goes, Lovelin is by far the most revered idol on Tamagotchi Planet. She has been acting in many TV shows, hosting many events, and singing in many idol stage performances. She has thousands of fans and she is well-known for her cute appearance and her honest personality. Lovelin also have several singles of her own. Her most notable single songs include as Lovely Day and Miracle Kitchen. Lovelin has her own brand of heart shaped pink chocolates called Lovelin choco. These chocolates are made by herself with all of her heart to reach out to her fans' hearts.

Later, after making acquaintance with Melodytchi, Lovelin teamed up with her to become a duet in which they both perform regularly at a concert hall. Since then, both have been composing and performing their songs together ocassionally some of which she sings alongside her friend Melodytchi and her violin performances. Their most notable songs together are Happy Happy Harmony, Miracle Kitchen, Happy Heart, and Smile For Tomorrow.

Lovelin has a similar appearance to Lovelitchi. She has a blue heart on the left side of her face, pink stockings, and a three layered pink dress that changes brightness from each layer, from pink to white. She also has two Tama Hearts on her left ear, and a plain pink flower on the right. Pink beads are hidden behind both the Tama Hearts and flower to hold them on her ears like a hair tie, similar to the old Lovelin outfit. The heart on her cheek is actually makeup.

During Lovelin's debut in the anime, her past appearance consisted of pink beaded scrunchie on her left ear and a pink flower pin on the right ear. For clothing apparel also had a pink stockings, a blue heart birthmark on her face, and a pink 3 layered silk dress from the bottom dress line. From 2009 - 2011, Lovelin's appearance changed into Tama-Friend Tama Heart form during in episode 99. The same happened to Lovelitchi (herself) and Melodytchi.

In Lovelin's secret double-life, Lovelitchi (ラブリっち Raburitchi) is her original identity. She is a shy, honest girl who enjoys hanging out with her best friends.

Lovelitchi wears a blue dress with a pink fluffy collar, pink stockings, and wears two blue ribbons on her ears. She also carries around a pink heart-shaped purse.

Her later updated and current appearance consists of her Tama-Heart outfit.

Thief Papillon (怪盗パピヨン Kaitou Papiyon) is a master thief. Papillon means butterfly, and she is called this because of her butterfly-like mask. She is similar to Robin Hood. She steals priceless items from museums, sells them, and gives the Zeni or uses the Zeni to buy things and give them to the poor Tamagotchis of Tamagotchi Planet. She also often disguises herself as other Tamagotchis, such as Chamametchi or Kuchipatchi. Anpan Detective always chases her.

Sister Lovelin (シスター・ラブリン Shisutā・Raburin) is a nun and is Lovelin's Christian side. She is the top sister out of all of the Christian Tamagotchi sisters, and keeps on eye on all of them so they are all safe. The main thing she protects them from are vampires. She is the one who saved them from Vampire Mametchi by making him eat garlic. When the other sisters also get turned into vampires, Sister Lovelin feeds them garlic as well, turning them back to normal again.

Sister Lovelin's appearance is that of a Catholic nun.

In another episode, Vampire Mametchi turns Sister Lovelin into a vampire so he can marry her. But the other sisters were able to save her in time. At the end of the episode, it is revealed that she is still half vampire.

Mermaid Lovelin (人魚・ラブリン Ningyo·Raburin) is a very playful girl and loves playing with her best friend Hapihapitchi the Fish. One day she dreams to be a pirate called Captain Lovelin.

Captain Lovelin (海賊・ラブリン Kaizoku・Raburin) is the land form of Mermaid Lovelin, after using the Legendary Marine Blue to evolve herself and Hapihapitchi the Fish into land form. In this form, she is a Pirate captain of her very own ship and crew who searches for treasures and fortune.

Princess Lovelin is a very active girl and can never keep still. She wants everything her way and always gets it her way. She is a very bossy girl, but has a nice heart. She doesn't tolerate stealing and even stands up for what is right. She often gets in trouble with bad guys. Before everything goes bad, a samurai named Mametchi no Suke, a skilled swordsman, always saves her from evil bandits.

Kunoichi Lovelin (くのいちラブリン Kunoichi Raburin)is a doppelganger of Princess Lovelin, in which the former is actually a dual role. As her name implies, she greatly resembles to Princess Lovelin, albeit without the heart marking on her face, making her looked extremely similar to her original identity as Lovelitchi. When she disguised herself as Princess Lovelin, other people are unable to distinguish between her and the real princess, which potentially makes them thinks that the princess has a twin, until the ninja reveals her disguise. This form would later used in Episode 62 of Tamagotchi!, but not in the name of Kunoichi Lovelin.

Unlike Lovelin's other TV roles, this form is exclusive to Tamagotchi! Episode 37.

Lovelin's name comes from the word Lovely (ラブリー Raburī Lavurī), the same origin as her other most known identity, Lovelitchi. Rin may be an affectionate transformation of rī (for example, there are several Japanese people and fictional characters with a name of Yukari and a nickname of Yukarin). 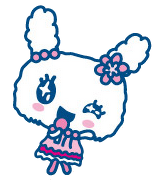 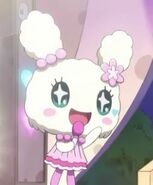 Lovelin as a cheerleader (Episode 3)

Lovelin with rocker-style hair and clothes

Lovelin as a Enka singer

Being imagined as a helicopter (Season 4 Episode 25)

Being imagined as a firetruck (Season 4 Episode 25)

Lovelin as a princess (Episode 30)

Retrieved from "https://tamagotchi.fandom.com/wiki/Lovelin?oldid=101855"
Community content is available under CC-BY-SA unless otherwise noted.