Female:
Lovelitchi (ラブリっち Raburitchi), previously translated as Lovelytchi and also known by her stage name Lovelin, is a female adult Tamagotchi character who debuted on the Tamagotchi iD and in the first episode of the Tamagotchi! anime, although her overall debut was in the TamaCafe playset.

Lovelitchi would eventually become one of the main characters and secondary (later primary) mascots of the franchise since 2009 due to her high popularity amongst the Tamagotchi fanbase, particularly in Japan. Her best Tama-Friend is Melodytchi, whom she makes popular songs with, such as Happy Happy Harmony and Smile for Tomorrow.

The name Lovelitchi is derived from the word Lovely, thus the spelling is actually Lovelytchi. But the letter 'y' isn't used as a vowel, only 'li' (リ). In English, Bandai America previously named her Lovelytchi on the TamaTown Tama-Go, but changed it to Lovelitchi in the Bright Way/9Go! dub of the anime and TamaTown, in order to keep the connection to Lovelin, her secret identity.

Names in Other Languages

Lovelitchi resembles a white bunny and may be based on an Angora rabbit. She has fluffy fur, pink cheeks, and two upright, woolly ears. Her eyes are teal with sparkle-shaped highlights. In both of her designs, she wears a dress, stockings, a heart-shaped purse, and decorations around her ears. There are two primary designs of Lovelitchi because her outfit was changed in Episode 95 of the Tamagotchi! Anime.

In her original design, she wore a frilly blue dress with a fuzzy pink collar, dark pink stockings, and a blue ribbon on each ear.

In "Is This a Confession? Mystery Profile", Lovelitchi's appearance had changed into Tama Heart form. The outfit change was given to Lovelitchi by her mother, Lovemamalitchi. The two Tama Hearts were added by Moriritchi.

Lovelitchi's two bows were replaced with two ancient like Tama Hearts, and a pink beaded scrunchie similar to her Lovelin identity. Her dress color has been changed to pink with another white dress underneath, her neckline was changed with a blue bowtie with long ribbon strands, and her stockings' colors were changed to blue instead of pink. Her pink heart shoulder bag is still the same.

Lovelitchi is a very sweet girl who cherishes her family and loves meeting new people. She is very kind and likes to help out, which can lead to her worrying about pleasing everyone. Due to bad experiences in the past, she used to believe that "idols can't have real friends", until she transferred to Tamagotchi School. Since then, her friends have helped her gain some confidence. Her favorite activity is singing, but she also likes dancing, and trying on new outfits. She is positive and hardworking, even when it comes to her career as a superstar, though sometimes she may end up overworking herself.

Throughout the anime series, it is mentioned that Lovelitchi enjoys reading and can be slightly air-headed at times. It is also revealed that her favorite food is Neapolitan ice cream, and her least favorite food is bell peppers. Lovelitchi is also depicted to be talented at drawing in some episodes.

Her profile on the Tamagotchi Pix website states: "Lovelitchi has a positive attitude. With a strong sense of responsibility, she cares a lot for her famiy and friends."

In the Tamagotchi iD Lovelitchi evolves from Shelltchi, and can be obtained with 0 care mistakes. She can reach Tamatomo level by purchasing and putting on the Heart sunglasses, playing with the mic toy, and eating the love cake.

She is obtainable in the Tamagotchi iD L series by raising her from Painaputchi (Also applies to the Princess Spacy Ver.) with 0-1 care misses.

Lovelitchi appeared in the Tamagotchi P's as a special character raised only when connecting the Love & Melody Tama Deco Pierce to the device. She can be obtained by playing with the stage mic 3 times with any female teen character.

Lovelitchi evolves from Pannakotchi with 10 or more Art skill points, and 0-4 care mistakes.

Lovelitchi can be obtained from any female teen with 0-2 care mistakes.

Lovelitchi is obtainable as a first generation adult with 0-1 care mistakes or by feeding the Pancake snack 3+ times with 2-3 care mistakes. She can be befriended and married as a NPC at Tama Resort Hotel.

Her favorite items are:

Lovelitchi is a raisable character on the Hello Kitty Tamagotchi, where she can be obtained with perfect care.

Lovelitchi appears on the Tamagotchi Pix as a raisable adult. She is obtained from a female teen from a pink egg with 0-1 care mistakes or from eating the Dessert Platter snack 3+ times.

Lovelitchi appears on the Tamagotchi Smart, as a raisable adult exclusive to the Melody Friends TamaSma Card. She is obtained from a female teen by feeding them the Love Napolitan meal the most out of the card's foods.

Lovelitchi is one of the main female characters in the anime, Tamagotchi!. She was first seen as Lovelin in "Get Ready! The Big Race on Tama Street" and then made her major debut in "Tamagotchi School's Transfer Student". She lives in the TamaCafe with her family, Lovepapalitchi and Lovemamalitchi, which also acts as a cafe restaurant run by her mother and father. Lovelitchi leads a secret double-life under the stage name Lovelin. As Lovelin, she is the most popular idol of all in Tamagotchi Town. She appears in many activities as a host, singer, reporter, and often as the lead character in television shows.

In the first season, Lovelitchi becomes friends with Mametchi, Kuchipatchi, Memetchi, and many other Tamagotchis. This makes her struggle with keeping her identity as Lovelin secret as she does not want to lie to them, but also is afraid of getting bullied again like what had happened at her previous schools. Eventually, she tells the truth in "Listen! Lovelin's Confession" and her friends happily assure her that they are still friends and promise to keep her secret between them.

In the second season, Lovelitchi's phone, Telelin, becomes sentient after the Kuchipatchi of Truth sends Lovelitchi and her friends back in time to help an ancient society of Tamagotchis. After returning to the present, Telelin would remain sentient and join Lovelitchi on her adventures, usually riding in Lovelitchi's bag. In "Confession! Lovelitchi is Lovelin!", Lovelitchi eventually reveals her secret identity as Lovelin to everyone at Tamagotchi School which meant that she would no longer have to hide her identity anymore.

In the third season, Lovelitchi meets and quickly befriends Melodytchi, a famous violin player who visits Tamagotchi Town. The two become close and decide to collaborate with each other for musical performances, eventually creating the song "Happy Happy Harmony" in the episode "Dream Collab! Happy Happy Harmony". At the end of the episode, Melodytchi decides to live with Lovelitchi at Tama Cafe.

In the last arc of the original Tamagotchi anime series, Lovelitchi and Melodytchi collect Tama Hearts on their Tama Profys, usually at the end of each episode.

After Tamagotchi! ended, Lovelitchi only appeared once during Tamagotchi! Yume Kira Dream, in "Tamatomo Reunion! Coming Home to Tamagotchi Town" where she and the other original cast members gave Mametchi a party to celebrate his birthday and welcome him back home. She had no appearances in the following season, Tamagotchi! Miracle Friends.

Lovelitchi returned as a main character in GO-GO Tamagotchi!. She first appeared in "Tamagottsun ♥ Big Meeting!?" where she reunites with Mametchi. She is introduced to Pianitchi, Coffretchi, and other Dream Town residents, as well as the two new students Neenetchi and Orenetchi. Later, she meets Yumemitchi and Kiraritchi and performs with them as Lovelin during their debut as idols. She also accepts Pianitchi as part of her music group and they make a new song together.

She greatly admires Hitomitchi and at first was worried that she was "better" than her, and tried to change her own idol style to become good enough. However, Hitomitchi taught Lovelitchi to just be herself and Lovelitchi continued with her usual style of music.

In Eiga Tamagotchi: Himitsu no Otodoke Dai Sakusen!, she follows Mametchi, Memetchi, Kuchipatchi and Nijifuwatchi to deliver an egg to Gotchi King.

Lovelin is Lovelitchi's secret identity as a pop star and actress. She is very popular and has many fans that adore her and watch everything she appears in. Lovelin has many roles in the entertainment industry, acting in many of TAMAX_TV's shows and movies, working as a TV reporter, and performing in concerts with her own original songs.

Young Lovelitchi (やんぐラブリっち Yangu Raburitchi) is Lovelitchi in her much younger years, about 6 - 8 years ago. Her dress and ribbons are yellow instead of blue. She is very clumsy and a crybaby, always running into everything and crying a lot. Her behavior is somewhat similar to Chamametchi; she can be child-like and emotional. Her main appearance was in "Mother's Day for Lovelitchi". She has only appeared in the Tamagotchi! anime twice.

Lovely Fire (ラブリーファイヤー Raburī Faiyā) is one of Lovelitchi's Personality Stage forms on the Tamagotchi 4U and 4U+. Her ears catch on fire and her eyebrows become prominent, thick, and furrowed. In this form, she is very determined, and becomes much faster and stronger. Her burning ears can also catch other things on fire as well. On the 4U, Lovelitchi will transform into this stage if she has all of the special skills and her happiness is at least 80%. She reverts back to normal form if her happiness drops below 60%. In GO-GO Tamagotchi!, she appeared in the episode "A Miraculous Effort! Lovely Fire"

Princess Loveli is a princess form of Lovelitchi that debuted as a Henshin Jo transformation on the Tamagotchi iD L. She later appeared as her own character in the Fantasy version of the Tamagotchi Meets.

Lovepapalitchi is Lovelitchi's father who works at his own photo studio on Tama Street and occassionally helps out at Tama Cafe. He is very supportive of Lovelitchi's superstar career and his photo studio has pictures of her all over the building.

Lovemamalitchi is Lovelitchi's mother who runs the TamaCafe. Like Lovepapalitchi, she is supportive of her daughter's superstar career. She often helps Lovelitchi create desserts such as chocolates for her friends and fans.

Lovesoratchi is Lovelitchi's little brother who debuted in GO-GO Tamagotchi! He has a strong bond with Lovelitchi as she watched over him when he was a baby and child. 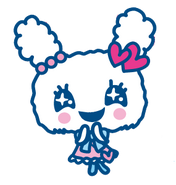 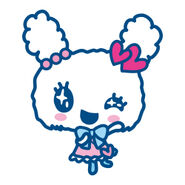 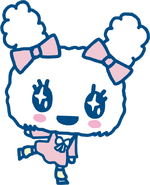 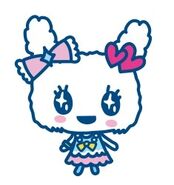 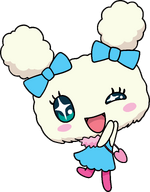 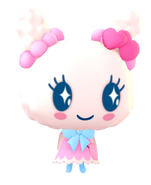 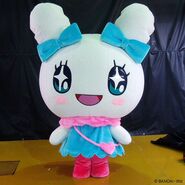 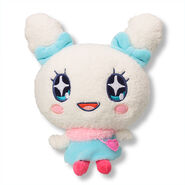 Lovelitchi and Mametchi in the PV for the Tamagotchi Meets