Lovesoratchi (ラブソラっち Rabusoratchi) is Lovelitchi's younger brother, and the second child and son of Lovemamalitchi and Lovepapalitchi. He was born in episode 16 of GO-GO Tamagotchi! and reached his final growth stage in episode 33. He appears on the Tamagotchi 4U and the Tamagotchi 4U+. He is unique from other Tamagotchi characters, as he maintains his name and some physical traits throughout each stage of his life.

As a baby, Lovesoratchi looked like a round, fluffy cloud with stubby arms. He had beady blue eyes, circular pink cheeks, tufted hair on his forehead, and a blonde curl on each side of his head. He moved by bouncing or had to be carried.

In episode 26 of GO-GO Tamagotchi!, Lovesoratchi became a toddler and his appearance changed slightly. He had a body with two legs and wears a blue suit with a white cloud on it. His eyes also grew bigger and more oval-shaped. In this form, he could crawl until he later learned to walk.

Lovesoratchi's fully evolved form was first revealed on some merchandise, and then he evolved in episode 33 of the anime. In his fully evolved form, he has white highlights in his eyes, and his right curl is replaced by two big spiky tufts of hair that somewhat resemble feathers. He appears to have three tufts of fur below each side of his face, just like Lovelitchi. His outfit also changes; he wears blue pants and a yellow shirt with a blue scarf knotted like a tie. The blue scarf originally belonged to Mofumofutchi.

As a baby, Lovesoratchi was cheery and playful. Like most babies, he was innocent and curious. Sometimes he could get upset and had to be calmed down by another Tamagotchi. Since he was naive, he occasionally did things he shouldn't without realizing, such as when he played with Kuchipatchi's beak. He was also surprisingly nimble; one time he grabbed a cookie that Kuchipatchi was about to eat while it was still in midair. When he was a baby, the only word he could say was "love" (ラブ).

When he evolved into a toddler, he began to speak more developed dialogues. He started to say more words such as "like" (好き suki) when he saw something he liked. He also has an ambitious interest in the sky and the things in it, as well as anything that can fly. For example, he likes clouds, stars, butterflies, and Hapihapitchi. He also greatly looks up to Mofumofutchi.

Lovesoratchi shares a strong bond with Lovelitchi. He also sees Melodytchi as a big sister, who is responsible for taking care of him along with Lovelitchi. He is close to many other friends of Lovelitchi, especially Mametchi. However, he can sometimes be shy when meeting other Tamagotchis. He used to be nervous around Tsuyotchi, but they became friends in the end.

Spacytchi is fond of Lovesoratchi and wants him to join in with his world domination plans.

Lovesoratchi was once a huge fan of Gotchiman, almost as much as Mametchi. While his interest in the show decreased significantly, it is implied in episodes 42 and 48 that he still likes Gotchiman to some extent.

Lovesoratchi reached his fully evolved form in episode 33 while helping to push Mofumofutchi's rocket to space when there was a mechanical malfunction.

Lovesoratchi made his official debut on a Tamagotchi virtual pet as a downloadable male adult. He can be obtained from using the binocular item three times as a child. He sleeps from 8 PM to 7 AM.

Lovesoratchi is an unlockable built-in male adult. He is unlocked through making 10 NFC connections. When he is unlocked, in order to obtain him, the child Tamagotchi must have 10 or more Art skill points and 20 or more Happiness.

Love comes from Loveli, which implies he is part of the Loveli family. It also comes from the names of the other family members; Lovemamalitchi, Lovepapalitchi, and Lovelitchi. Sora means "sky". Lovepapalitchi thought of the name because of a photo he took of Lovesoratchi as an egg under the sky.

The photo that inspired Lovesoratchi's name

Lovesoratchi when he first hatched

Lovesoratchi wearing a hat and bib 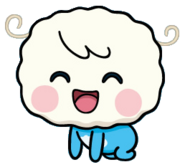 Artwork of Lovesoratchi as a toddler, crawling

Lovesoratchi's toddler form in the anime

Lovesoratchi as a Cat costume
Add a photo to this gallery

Lovesoratchi running to his parents 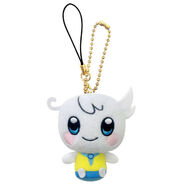 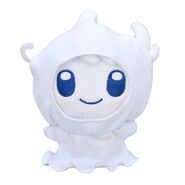 A Halloween themed plush of Lovesoratchi in a ghost costume 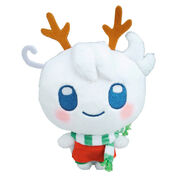 A Christmas themed plush of Lovesoratchi 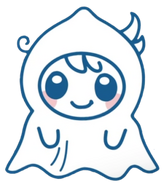 Lovesoratchi in a ghost costume

Add a photo to this gallery
Retrieved from "https://tamagotchi.fandom.com/wiki/Lovesoratchi?oldid=94407"
Community content is available under CC-BY-SA unless otherwise noted.