Male:
Magictchi (てじなっち Tejinatchi) is an adult male character that has appeared in multiple Tamagotchi media, primarily video games, and made its sole appearance as a raisable character on the Tamagotchi Connection Version 5 Celebrity.

Magictchi has yellow skin and a white face. He wears a magician's outfit with a red bow, and a top hat with a pigeon on top of it.

A friendly Tamagotchi that is skilled with illusions and magic tricks.

Magictchi is a male Active Family adult that can evolve from any of the male teens (Mamekatchi, Kikitchi or Nonopotchi) with high Active training and a Bonding percentage between 40% and 70%. Upon marriage, he evolves into Maharajatchi.

Magictchi appears as an NPC that can be interacted with at Toy Park.

Magictchi appears in the Tamagotchi! anime as a background character at TAMAX-TV.

Magictchi is a possible customer in Tamagotchi Connection: Corner Shop 3 and Tamagotchi no Kira Kira Omisetchi.

Magitchi debuted on the Tamagotch Channel website across various images throughout 2006-07 before being used as a character on several cards and Tamagotchi Connection: Corner Shop 3. 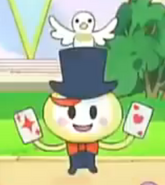 Magictchi performing before a crowd in the Tamagotchi! anime

Add a photo to this gallery
Retrieved from "https://tamagotchi.fandom.com/wiki/Magictchi?oldid=92250"
Community content is available under CC-BY-SA unless otherwise noted.