Female:
Maidtchi (めいどっち Meidotchi) is a female adult Tamagotchi character that debuted on the Chou Jinsei Enjoi Tamagotchi Plus in Japan and on the Tamagotchi Connection Version 4 internationally.

Maidtchi's body is dark blue with white lace around it. Her face and arms are light blue, and she has two Mouse ears on her head. She also has white lace on top of her head, resembling a maid's hat. She has pink cheeks and the highlights in her eyes are shaped like triangles.

Her personality is of a maid and she works hard to keep her house clean and tidy. Everyone likes Maidtchi and she is a top favorite among the Tamagotchi boys.

Maidtchi is a female Mame Group adult that can be raised from either Young Mimitchi or Ringotchi when the Artistic Skill Point is the highest.

Maidtchi can be obtained on any even generation by taking moderate to poor care.

On the Tamagotchi Plus Color and Hexagontchi series, Maidtchi can be obtained on even generations by giving one to three care misses to either Chamametchi or Ichigotchi.

Maidtchi is an NPC that serves as a waitress at the Tamagotchi Restaurant.

Maidtchi is an NPC that serves as a waitress at the restaurant.

Maidtchi is an NPC that serves as a waitress at the restaurant in My Town.

Maidtchi appears as a background character.

Maidtchi is depicted as a student at Tamagotchi School. She likes to sweep the classroom in the mornings before school begins for each day. In episode 5 she is in Kuromametchi's team for a friendly competition between students. 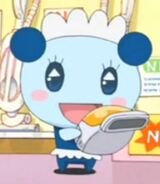 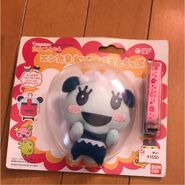 Add a photo to this gallery
Retrieved from "https://tamagotchi.fandom.com/wiki/Maidtchi?oldid=97036"
Community content is available under CC-BY-SA unless otherwise noted.