Maimaitchi resembles a snail. He has a cream body with arms but no legs. On his back is his shell, which is made of pink, yellow, and orange concentric circles. He has green ears on his head similar to Mametchi's.

Maimaitchi likes to try new things. He also likes to play with Petithanatchi but she gets anxious around him. Maimaitchi wants everybody to like him, so he tries to set a good example.

Maimaitchi can evolve from either Mitsumarutchi or Turtletchi when trained with a Gourmet personality or has a 50% chance of appearing with any other Personality except Intelligence. His adult evolution depends on care mistakes and personality training.

Maimaitchi can evolve from either Mitsumarutchi or Turtletchi from good care. His adult evolution depends on care mistakes and personality training. As the mid-tier teen, he is more sensitive to Care Mistakes than Cosmotchi is, but is less sensitive than Bokuhoshitchi.

Maimaitchi can now be obtained as a girl, as all of the teens in the m!x range are available in both genders. It evolves from all four children with six or more care mistakes and less than 20 happiness. 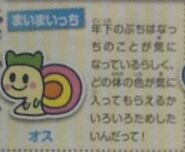 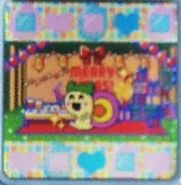 Maimaitchi on the Tamagotchi P's
Add a photo to this gallery
Retrieved from "https://tamagotchi.fandom.com/wiki/Maimaitchi?oldid=89045"
Community content is available under CC-BY-SA unless otherwise noted.