Mamametchi has cream skin and pink Mametchi ears. The ears resemble a hat that goes over her eyes slightly. She has a ribbon on the side of her ears like Chamametchi does, except it is the same color as her ears (pink) instead of yellow.

She wears a pink scarf and skirt. Originally, she did not wear a shirt. However, in the Tamagotchi! anime she was changed so that she wore a light pink shirt.

In the anime, she has blue irises. Originally in Tamagotchi: The Movie and Let's Go! Tamagotchi, there was no white reflection on her eyes. Later on in the Tamagotchi! anime, her eyes were given a more shiny appearance.

Mamametchi likes cooking and often makes cookies and pies for when Mametchi's friends come to visit.

Mamametchi's first animated appearance was in Tamagotchi: The Movie. She is seen early on in the movie carrying Chamametchi's egg in a brown sling. She appears later on when Mametchi and his friends are in space, and she watches them from the Mamemame Laboratory.

Mamametchi appears from time to time in the Tamagotchi! series. She can usually be seen at Mametchi's house.

Mamametchi's name comes from mama and Mame, as she is the mother of the Mame Family.

The Tower of Nebulus (Episode 30)

"Mametchi! What happened to cleaning your room, young man?" (Episode 19) 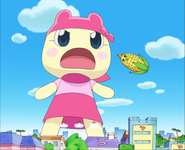 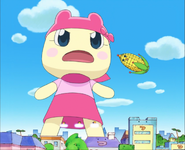 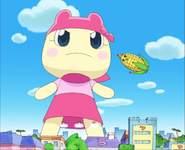 Mamametchi's bare feet and legs (Episode 30)
Add a photo to this gallery
Retrieved from "https://tamagotchi.fandom.com/wiki/Mamametchi?oldid=101891"
Community content is available under CC-BY-SA unless otherwise noted.