This article is about the vintage character. For information on the modern character, see Masktchi.

His name comes from the English word mask. In the original US promotional material, his name was hyphenated ("Mask-tchi").

Maskutchi has a round, white, bean-shaped body with a pair of stubby violet ears on top, has two stick legs, and wears a violet mask. In its original artwork, these violet parts were colored indigo instead. In its US artwork, it has a blue body, black ears and wears a black mask. On the Tamagotchi L.i.f.e. app, it has two other variations: one with pink ears and a pink mask, and red with green ears and mask, like a strawberry. Strangely, the pink variant looks more like his new design- years later.

Maskutchi is an intelligent Tamagotchi and likes to learn. They are generally quiet and have a habit of spying on others by staring at them.

Maskutchi is an average care adult obtained from Tamatchi. Whether the Tamatchi begins with 50% or 0% Discipline, it must not receive any more than 50% Discipline. Hungry and Happy hearts must be filled only once they're halfway empty. If it had any Discipline before evolution, it will have 0% Discipline upon evolving. Maskutchi wakes at 11 AM, sleeps at 11 PM, and has a base weight of 30. It has a maximum lifespan of 15-16 days on the original release and 19-20 days on the rerelease.

Maskutchi can evolve further into the secret character: Oyajitchi on the Japanese version, and Bill on the international version. This can only be done if it evolved from a Tamatchi that began with 0% Discipline, meaning it must have had 50% or less as Marutchi. After evolving into Maskutchi, it must be given good to perfect care, with no care mistakes. Once the proper conditions are met, it will evolve between the ages of 9 and 10.

Maskutchi's game quirk is hesitating just before turning left or right, implying it's trying to cheat. However, it has less patterns memorized, and is easier to win games than some other adults.

Maskutchi is one of four adults Marutchi can evolve into, obtained through average care. It can become Oyajitchi (Darumatchi on the Kaien version) if good care is maintained.

Maskutchi appears an an NPC when visiting Tamagotchi Town '96, available through the '96 Touch Card.

Maskutchi appears on the 20th Anniversary and Gift versions, and can be met, befriended, and married at Professor Banzo's laboratory. His favorite item is the party popper. He is shown with parents in the family portrait.

Maskutchi is a marriage partner exclusive to the app, and was available to marry from March 1 through April 1, 2020.

Maskutchi is one of ShiroBabytchi's four possible evolutions, evolving through below average care.

Maskutchi appears as a NPC that can be encountered in the Park and in Explore mode.

Maskutchi appears in episode 2 of Anime TV de Hakken!! Tamagotchi. He constantly spies on Kuchipatchi, Ginjirotchi and Tarakotchi as they try to read their book, forcing them to run away. Eventually, Ginjirotchi becomes frustrated and gives him the book, but Maskutchi refuses and flees. Later, when the three Tamagotchis are busy having lunch, Maskutchi takes the book and reads it alone.

Maskutchi stars as the main protagonist and, like in Tamagotchi CD-ROM, he is known as "Masktchi". He is partnered with Hashizoutchi for an expedition to Earth, but Hashizoutchi finds corn and immediately returns to the ship, leaving Maskutchi alone to find an artifact from Earth for the museum. He eventually finds a gumball machine and steals it, leaving a golden egg in its place. However, he ends up dropping and breaking it. A young human girl cheers him up by offering him a Popsicle. Maskutchi is delighted, but has nothing to offer her in return, but she doesn't mind.

By the time Maskutchi returns to the ship, the Popsicle had completely melted, leaving only the stick. The others tease him about it, but when he shares his story, Cosmotchi is delighted, as the stick now had a deeper meaning of human selflessness and kindness. Maskutchi is given a medal, and the stick is placed inside the museum.

In the opening video, he is shown piloting a UFO to Earth with Zuccitchi. The two get into a fight over who should clean the ship's cabin, leaving nobody at the controls, sending the UFO falling to Earth. They stop the ship just in time, and leave an egg to explore the planet. He is also a raisable character and is known as "Masktchi".

Maskutchi is a Group E adult that evolves from Tamatchi with bad care and high intelligence.

Maskutchi is one of the raisable male adults in the app. 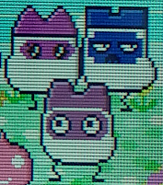 Maskutchi with both his parents