Both genders:
Meganetchi (めがねっち) is a child character that debuted on the Chou Jinsei Enjoi Tamagotchi Plus in Japan and in My Tamagotchi Forever internationally.

Meganetchi has a round, white body with two tiny legs. He has large blue square-shaped glasses. One of the lens is slightly larger than the other. He also has small round pupils.

Meganetchi is very proud of his big glasses. Actually, they're a part of his body, so he can change their shape.

Meganetchi is one of the children in the Hatena Group, evolving from a Hatenatchi born from using Dating Card #1 after one hour. As with all children on the Entama, it has a base weight of 5g and sleeps from 8pm to 9am. After 48 hours, it will graduate from preschool and evolve into Ohigetchi.

Meganetchi evolves from anyone from the baby stage by eating mostly veggies.

Meganetchi appears as a minor character in episode 49, and is depicted as a male preschooler. 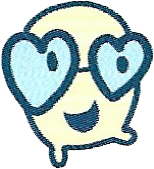 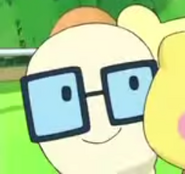 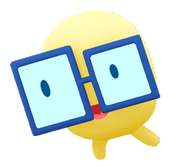 Artwork for My Tamagotchi Forever

Add a photo to this gallery
Retrieved from "https://tamagotchi.fandom.com/wiki/Meganetchi?oldid=93818"
Community content is available under CC-BY-SA unless otherwise noted.