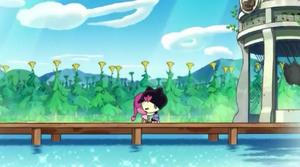 Melody Revived (よみがえったメロディ Yomigaetta merodi) is episode 120 of the Tamagotchi! anime. It aired on March 12, 2012. The creator of the episode is Matsui Aya. It features the full appearance of 'My Friend' since her foreshadow in episode 119. Plus, it also features the first appearance of Smile For Tomorrow, a song made by Melodytchi.

The plot continues from episode 119. Melodytchi catches up to the mysterious character she was chasing and pulls her out of another bright light. She tells the shy character her name, who doesn't say anything. Seeing that it's almost dark, they go into a small cave under a tree and sleep there for the night. Still the character doesn't say anything to Melodytchi, but often stares at the Melody Violin. However, she then sleeps on Melodytchi's lap throughout the night. Melodytchi's friends are now worried and decide to go to bed and search for her in the morning.

The next day Melodytchi and the unnamed character go out and explore the Melody Forest, trying to find the way back to the same house. Along the way Melodytchi hums Happy Heart and suddenly the character starts humming too. Because the character knows the song, Melodytchi realizes that it's My Friend, who she calls her violin.

When they get to the small house, Melodytchi asks if the character would like some sweets. The character nods her head side to side, meaning "no". Then Melodytchi says, "I know what you want." She goes up to the stage and plays her violin. The character's face suddenly goes sad and walks away. Melodytchi tells her to wait and says that she knows that she is My Friend. Melodytchi says she does not understand what is going on but tells her that she loves her violin very much and wants to know why it is not making any more music. My Friend then runs to Melodytchi, and Melodytchi runs to her as well and they hug. My Friend says that Melodytchi loves her Tama-Friends more than her. My Friend was afraid that she became a nuisance to Melodytchi, because she cannot follow a technique to grow up every day of her, saying that she keeps leaving her behind. Melodytchi then remembers, (at the start of episode 119) leaving her on her bed to play with her friends. She says sorry but tells her she takes care of her violin, that she doesn't want it to get damaged, saying that its so close to her heart. My Friend says she is sorry for misunderstanding Melodytchi, and Melodytchi says its alright.

Suddenly My Friend starts to glow and stands back, then she evolves into an adult. Melodytchi says she looks so cute. My Friend thanks Melodytchi and suddenly disappaears in a flash of light. Melodytchi then notices her violin is now glowing as well, and it turns white. She then smiles and picks up her violin and plays her new song to thank My Friend, Smile For Tomorrow. Her friends hear the music and find Melodytchi at the stage.

Retrieved from "https://tamagotchi.fandom.com/wiki/Melody_Revived?oldid=102825"
Community content is available under CC-BY-SA unless otherwise noted.