Female:
Melodytchi (メロディっち Meroditchi) is an adult female Tamagotchi character who debuted in episode 48 of Tamagotchi!. On the virtual pets, she debuted on the Tamagotchi iD Lovely Melody version in Japan.

Melodytchi's name comes from the English word "Melody", a succession of notes that is considered a tune or entity.

Melodytchi has a round, tan head with bright blue eyes and two pointed cat-like ears, which are hidden under a large, black hat with dark pinkish-red highlights. She wears purple, droplet-shaped earrings.

When Melodytchi was first seen on Tamagotchi Channel, her original initial apparel consists of a beamed note brooch on her hat colored pinkish-purple, a pinkish-red dress, and a light pink quaver note necklace around her neck. When Melodytchi debuted in the Tamagotchi! Anime, the original colors of her beamed note brooch and her quaver note necklace were colored purple.

Melodytchi's appearance was altered slightly when she got the Melody Charm. From this point, she wore the charm as a necklace in place of her quaiver note. Her clothes remain the same.

Melodytchi's appearance significantly changed in episode 95 of Tamagotchi!. Her clothing was changed into violet overall shorts (with lighter violet buttons), and the beamed note on her hat was replaced by two Tama Hearts, similar to those found on Lovelitchi's new outfit that was introduced in the same episode.

Melodytchi is a friendly, fun-loving Tamagotchi who likes doing activities with her friends such as competitions and riding roller coasters, but sometimes she gets a little too excited. She is an optimistic Tamagotchi who always wears a smile, and is good at cheering her friends up, even when things are going badly.

In addition, she can't understand love at all and has a strange sense of humor, being one of the only ones to enjoy the Gotchi King's egg-themed puns. She also likes food, especially sweets. Lovelitchi is her best Tama-Friend. She frequently speaks English in the anime, often saying "good morning", "hello", "goodbye", and instead of "watashi wa," she says "mī wa" (mī being the English word me).

Melodytchi loves sweets so much that she has even once had a fight with Kuchipatchi over a cookie. She likes to taste all different kinds of sweets but she doesn't eat as much as Kuchipatchi does. She loves her violin because it was given to her by Joou Sama and she has had many experiences in playing it. She calls it her "friend" and treats it very well as if it were alive.

Melodytchi is an adult available on both versions of the Nano, but with different conditions for both.

For the version 1, Melodytchi is a special adult that evolves from Pichikutchi after 24 hours if the game is won at least 40 times.

For the version 2, Melodytchi is a standard adult that evolves from Choribotchi after 24 hours with average care.

Melodytchi is a character exclusive to the Love & Melody Tama Deco Pierce that results from using the Latest Violin 3 times on any female teen.

Tamagotchi 4U and 4U+

Melodytchi is obtained from any child having 10 or more Sport skill points and 0-4 care mistakes.

Melodytchi is a marriage partner available at Melody Land, which is exclusive to the Melody version.

Melodytchi is a raisable character exclusive to the Melody Friends TamaSma Card. She is obtained from a female teen by feeding them the ♪Sachertorte♥ snack the most out of the card's foods. Noticeably, she is also the only Tamagotchi who likes Oyajitchi's photo.

Melodytchi is a classical musician and a huge violin star, playing with her Melody Violin. Melodytchi also plays her Melody Violin in the popular songs Happy Happy Harmony, Happy Heart, and Smile For Tomorrow. Her favorite song is Melody Waltz, and her violin teacher is Classictchi. She often performs in concerts and at TAMAX-TV with Lovelin. Melodytchi comes from Melody Land, her hometown. She has a mother and father named Melomamatchi and Melopapatchi. She owns two Tama Pets, Sopratchi, and Doremitchi. She and her pets moved to Tamagotchi Town and live at the Tama Cafe with Lovelitchi and her parents, Lovemamalitchi and Lovepapalitchi. Melodytchi cares about her parents and often misses being in Melody Land with them.

Melodytchi made her debut in the anime in "Rival? Idol? Meloditchi Entry" where she moves to Celebria and quickly makes friends with Lovelitchi after seeing her passion for music. In "Dream Collab! Happy Happy Harmony", she collaborates with Lovelitchi to create the song Happy Happy Harmony and moves in with her at TamaCafe to stay close to her. She used to have her own separate room until an accident in "Mambo! Melodytchi's Reform Big Battle" breaks the wall between Melodytchi and Lovelitchi's rooms. Instead of putting the wall back up, Lovepapalitchi creates an entryway between the rooms to connect them. In "Hello! Tamagotchi School" she enrolls in Tamagotchi School and makes friends with all the students while doing well in class.

In "Kyu Kyu~! Invitation to Melody Land / Myu Myu~! The Melody Charm is Born", Melodytchi visits Melody Land to perform in the music festival at Joou Sama's castle. The episode reveals that the Melody Violin was an ancient instrument that chose Melodytchi when she was young, glowing after she played around with her father's violin at the castle. At the festival, Melodytchi and Lovelitchi perform for Joou Sama and the Melody Charms present themselves to the two having chosen them as their new owners. In "Kyu Kyu! Doremitchi is Lost / Teleletten! Melody Charm Miracle", Doremitchi and Sopratchi accompany Melodytchi when she returns to Tamagotchi Town at her parents' request.

Melodytchi and Lovelitchi's Melody Charms fuse with Mametchi's Profy machines in "Formation! Tama Profy", creating the Tama Profys. The two would go on to collect Tama Hearts in the Profys whenever they appeared from other Tamagotchis forming strong bonds.

In "Melody Violin Loses its Sound", when the Melody Violin went missing, Melodytchi cried and looked for it desperately. When it was finally found, Melodytchi hugged it and was relieved. Later in the series, it was revealed that Melodytchi's violin really does have a spirit.

Melodytchi only appeared in "Tamatomo Reunion! Coming Home to Tamagotchi Town", where she and the others threw a surprise welcome home birthday party for Mametchi, Memetchi, and Kuchipatchi when they returned to Tamagotchi Town for a day. She was absent from Tamagotchi! Miracle Friends.

Melodytchi returned as a central character in GO-GO Tamagotchi!, in which she becomes friends with Pianitchi who wanted to learn more about Mametchi's old friends. During her time in DoriTama Town, she revealed she knew how to play the electric guitar, even though the violin was her specialty.

Melodytchi appeared in some More! Tama Talk at the Earth sequences that occured at the end of the episode.

Young Melodytchi (やんぐメロディっち Yangu Meroditchi) is a younger version of Melodytchi that appears in flashback sequences in the anime. She has smaller eyes than the adult Melodytchi, and doesn't wear a hat.

Melodytchi Investigator (メロディ捜査官 Merodi Sousakan) is a detective. She carries a pink and blue laptop in which she records all her information, which resembles the TamaTomo PC. She seems to be Anpan Detective's rival, as she often follows him around to record the latest news, but this sometimes annoys and distracts Anpan.

Melody Hime (メロディ姫 Merodi Hime) is Melodytchi's Henshin Jo transformation. She is dressed up as a Japanese princess. She appears in "Ohohoho! The Three Hell Devil Sisters Again" in the Tamagotchi! anime and on the Tamagotchi iD L.

Oyamelojitchi is a Personality stage form of Melodytchi on the Tamagotchi 4U. This form is based off of Oyajitchi. Melodytchi gets along famously with Oyajitchi. When she helps him out at his food stand, she might take on this form, cheerfully singing traditional Japanese ballads with him and cracking old man jokes. Oyamelojitchi is obtainable on the Tamagotchi 4U by talking to Oyajitchi at the park. She also appeared in "Passion Blooming! Summer Festival" of GO-GO Tamagotchi!.

Melody Muse is another Personality stage form of Melodytchi exclusive to the Tamagotchi 4U+. Her hair is more grown out and she wears a long purple dress, resembling a high class musician. When Melodytchi perfects all of her skills and is treated with kindness and encouragement, she ascends into this form. A majestic, beloved musician, her music brings love and joy to all who hear it. She is obtained by having all special skills and keeping happiness above 80%.

Melomamatchi (メロママっち Meromamatchi) is Melodytchi's mother. She is known as a singer in Melody Land. She is very proud of Melodytchi and often cries on how proud she is, and how much Melodytchi loves her.

Sopratchi is one of Melodytchi's Tama-Pets. She has a calm personality and is always worried about the recklessness of her younger sister, Doremitchi. 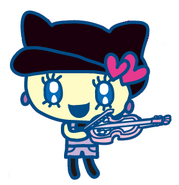 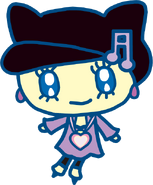 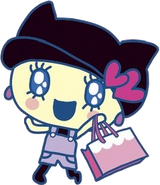 Melodytchi with a shopping bag

Anime version of Melodytchi with her Melody Charm

One of Melodytchi's anime poses 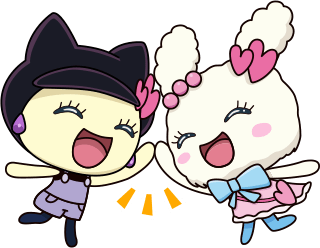 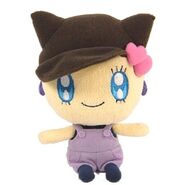 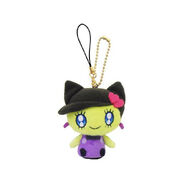 A keychain plush of Melodytchi