Memepatchi has a light pink body that somewhat resembles an upside down heart. She has pink,oval-shaped ears, pink cheeks, and sparkly eyes. She has tiny stick-like feet.

This Tamagotchi loves to boast about her pink ears and pretty eyes.

Memepetchi is the female child of the Meme Group, evolving from Memeputchi after one hour. As with all children on the Entama, she has a base weight of 5g and sleeps from 8pm to 9am. After 48 hours, she will graduate from preschool and evolve into Young Memetchi with less than four care mistakes or Ichigotchi with four care mistakes. Her male counterpart is Memebotchi.

Memepetchi is student #105. Her favorite subject is music.

Memepetchi is one of two female child stage characters. She evolves from Nokotchi on an even generation and can evolve into either Chamametchi or Ichigotchi. 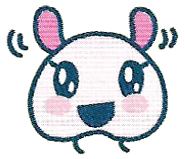 Add a photo to this gallery
Retrieved from "https://tamagotchi.fandom.com/wiki/Memepetchi?oldid=100591"
Community content is available under CC-BY-SA unless otherwise noted.