She and Professor Banzo were the main characters for presenting the Tamagotchi franchise in Japan during the 90s, and featured in the video games, on packaging, in guide books, and more. However, since the 2004 reboot, she has been completely absent aside from a few special appearances.

Mikachu is timid, but cheerful and very enthusiastic about researching and raising Tamagotchi. She also makes mistakes a lot, but tends to play the straight man to Banzo in his sillier moments.

Mikachu was 16 years old and attending high school in Shibuya in 1996. Along with helping Banzo with his experiments, she also cleans and maintains the laboratory.

She was comforting Banzo one night on a bridge crossing the Sumida River when a UFO crashed into the water. The two brought it to the laboratory, and after discovering the plight of the aliens inside, they designed and built the "Tamagotchi HOUSE" (たまごっちＨＯＵＳＥ), a compact device for the aliens to live inside. She began painting some with unique designs and brought them to school with her, triggering interest from her classmates and sparking the spread of Tamagotchis around the world.

She is friends with Senatchi.

Mikachu appears alongside Banzo as an NPC on the 15th Anniversary version, appearing when visiting Professor Banzo's Laboratory.

Mikachu appears alongside Banzo as an NPC on the 20th Anniversary and Gift versions, appearing when visiting Professor Banzo's Laboratory. She may also sometimes be seen attending weddings.

Mikachu appears with Professor Banzo in the short film Tamagotchi Honto no Hanashi, the first ever animated Tamagotchi media. They both recount how they discovered Tamagotchis and why they traveled from Tamagotchi Planet to Earth.

Mikachu is the playable character of the PS1 game, Hoshi de Hakken!! Tamagotchi. She travels with Professor Banzo to Tamagotchi Planet, but their ship ends up crash landing and marooning them on an island. The two decide to research the tamagotchi species on the island and the player controls Mikachu as she explores the island to collect all 94 tamagotchis. As she collects the tamagotchis she is able to take care of, play with, and breed them. 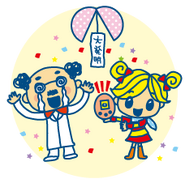 Artwork of Mikachu and Professor Banzo for Tamagotchi's 20th Anniversary

Professor Banzo and Mikachu in the Tamagotchi Fan magazine, said to be shown in the 15th Anniversary ver.

Mikachu in the opening cutscene of Hoshi de Hakken!! Tamagotchi

On the world map

Attempting to collect Beartchi
Add a photo to this gallery

Retrieved from "https://tamagotchi.fandom.com/wiki/Mikachu?oldid=103564"
Community content is available under CC-BY-SA unless otherwise noted.