Both genders:
Female:
Mimitchi (みみっち Mimitchi) is an adult-stage character that debuted on the second generation of the original Tamagotchi. Before Tamagotchi species were given specific genders, Mimitchi was usually described as a male. However, she was eventually specified to be female.

She became a staple character for the series during the original and Connection eras, but she was used significantly less in the anime and modern/color-screen era. Even so, she remained popular, and was voted the 9th most popular female Tamagotchi (in 2011) on the official 15th Anniversary Poll, surpassing Memetchi by 3 places.

Her name comes from the Japanese word "mimi", which means ear. This refers to her large rabbit-like ears.

Mimitchi resembles a plump white rabbit with long, dark blue or black ears, pink cheeks, and a small, round tail. She has button eyes and a rabbit-like mouth. According to various Tamagotchi media, her ears are actually a hat and nobody knows what's inside.

On the Tamagotchi L.i.f.e. app, she can also be hot pink, or yellow with green ears.

Mimitchi is a prodigy genius with an IQ of 200, making her one of the smartest Tamagotchis. She loves calculating numbers and reading books. She also likes writing, and has excellent penmanship. She has a sincere and polite disposition. One of her favorite meals is spaghetti with carrots.

When Mimitchi is angry, she bares her fangs and snarls.

In the Tamagotchi manga and anime, she has a speech habit. She adds the word "pyon" to the end of every sentence, which is the Japanese sound effect for bouncing. In the English dub of the Tamagotchi! anime, this is translated to "hop".

Mimitchi is a Generation 2 character, replacing Mametchi from the Generation 1. When the Tamagotchi is Tonmarutchi, good care must be provided and the Discipline meter must be filled to 75-100%. It will evolve into Tongaritchi and begin with 50% Discipline. From there, the user must maintain perfect care and fill the Discipline meter to 100%. Mimitchi has a base weight of 30, wakes at 9 AM, sleeps at 10 PM, and will never make Discipline calls.

Mimitchi appears in even-numbered generations with perfect care. On the V2 and V3, its favorite food is ice cream and it dislikes fish burgers on the former release and hamburgers on the latter. Having Mimitchi as a parent maximizes the likelihood of any offspring evolving into the healthier child - Kinakomotchi, Kuribotchi, or Mohitamatchi/Kuchitamatchi depending on the version.

Mimitchi's exclusive food, snack, and items on the V1 are sushi, tarts, and pencils and bows respectively, all shared with Mametchi.

Mimitchi is a female in the Mame Family. She evolves from Young Mimitchi or Ringotchi when the highest guts/skill is Intelligence, and on the V4 in addition to good care and high overall skill points.

Mimitchi is a universal adult, thus not limited to a family. She can evolve from UFOtchi or Ichigotchi.

Mimitchi is the perfect care female on odd-numbered generations.

Mimitchi is a non-raisable character that appears during walks from 10:00 AM to 5:59 PM.

Mimitchi is a female adult obtained through perfect care on odd-numbered generations.

Mimitchi is obtained from Mikazukitchi with 2-3 Care Mistakes. While she appears an an NPC on all variants of the iD L, her sprites as a raisable character are stretched out to accompany for any clothes and accessories she can wear. Her liked items include the hat hair accessory, diced tofu, fruits mitsumame, cooking set, and pumpkin pie.

Mimitchi is an NPC who can be visited in Tamagotchi Town and eventually proposed to. Her hereditary traits are her body shape, her ears, and her eyes. Because the m!x no longer has clothing options like the 15th Anniversary iD L, Mimitchi's sprites on this version are far more accurate to her design.

Mimitchi is a marriage partner exclusive to the Tamagotchi On App. She was made available twice; once on the Japanese app from May 1 through May 31, 2019, and on the English app from September 1 through October 1, 2020.

Mimitchi is an adult that can be raised from Babytchi with perfect care.

Mimitchi is a raisable character obtained from a female teen born from a blue egg with 2-3 care mistakes.

Mimitchi is a raisable character exclusive to the Pastel Friends TamaSma Card. She is obtained from any female teen by feeding them the Carrot Cake snack the most out of the card's foods. She also appears as a NPC in the Square year round.

Mimitchi first appears at the beginning of the Tamagotchi Video Adventures, following Maskutchi and Zuccitchi into the museum before noticing the fourth wall and turning on a machine that translates the Tamagotchi language into English in response.

Mimitchi is classified as a male and is paired up with Pochitchi during the expedition to Earth. The two of them find, watch and steal a television, but find that they are unable to get it to work upon returning to the Tamagotchi Planet to show Cosmotchi and resort to climbing inside to act their own show.

Mimitchi was one of the only Tamagotchis (who didn't already know Lovelitchi's secret) to notice that Lovelitchi looked identical to Lovelin, and how similar their names were. She even pointed this out to Lovelitchi herself before she voluntarily revealed the secret to all her classmates, which made Lovelitchi nervous at the time. The reason Mimitchi paid attention to their similarities may be because Mimitchi is known to be smarter than most other Tamagotchis. She is best friends with Ringotchi and, like many other Tamagotchis, is a big fan of Lovelin.

In "No Boys Allowed! The Princess Day Party", she attends the princess day party with the other girls in Ms. Perfect's class. She helps herself to the feast and takes a bite of pudding. In "New Members? To Class Suddenly", many students in Mametchi's class were replaced to make room for the new Tamagotchi iD L characters. There was a scene in which Mimitchi and Ringotchi were crying over now being in separate classes, solidifying the fact that they are best friends despite their small amount of focus in the anime.

Mimitchi evolves from Tamatchi if its stress is under 40, has zero selfishness and its power is higher than its intelligence. If its intelligence and power are equal, then a Tamatchi will randomly evolve into Mametchi or Mimitchi. Mimitchi's favorite food is carrots, it sleeps from 9pm to 7am and its highest possible beauty contest score is 95.

Mimitchi is a Group F adult that evolves from Tongaritchi with good care. Since all of the characters in Groups E and F are genderless, Mimitchi is incapable of breeding.

Kigurumitchi is a costume character based on Mimitchi. It is obtained when any adult character on the Tamagotchi Connection Version 2 wears the "rare" costume.

Young Mimitchi is the young form of Mimitchi. She is seen on the Chou Jinsei Enjoi Tamagotchi Plus and Tamagotchi Connection Version 1. She is very sincere and has great plans for her life. She loves to study and is a huge admirer of Mimitchi.

Detective Mimitchi is a role Mimitchi plays in the TAMAX-TV show, Princess Lovelin. She works with detectives KuroMametchi and Ringotchi to catch criminals who are causing trouble in the town. However, Mametchi no Suke usually beats them to it. 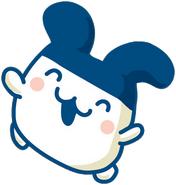 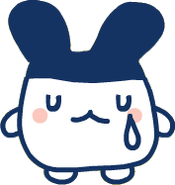 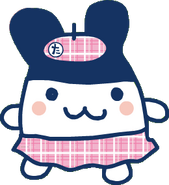 Mimitchi on an Original P2

Mimitchi a Gashapon Sticks Together