Female:
Miraitchi (みらいっち Miraitchi) is an adult female character who debuted in the third anime series, Tamagotchi! Miracle Friends as a main character. She has a twin sister named Clulutchi and a companion called Watchlin.

"Mirai" (未来) means "the future", which supports her origin as a Tamagotchi from the future. Together with the name of her twin sister, "kuru", they mean "the future arriving" (未来が来る). In addition, "mirakuru" (ミラクル) means miracle, which is from the name of the series she first appeared in.

Miraitchi has white skin and brown colored eyes with a heart mark in her eyes. Her hair is white with a ponytail, white tuft on her forehead, and two locks of hair down the sides of her face. Her ponytail and hair tuft sway to the right. She has a magenta colored rose tied on top of her hair to fasten her ponytail and her two locks of hair. For apparel, she wears a light pink dress with dark pink stockings, and a wears a pearl necklace.

In her Miracrised form in Episode 1 of Miracle Friends, Miraitchi wears a different dress, and has a pair of angel-like wings on her back.

When Miraitchi was younger, she wore a blue dress with yellow stockings, and had two blue beads on her head.

Miraitchi is the more fun twin. She is playful and loves to have fun, but she gets nervous when she is worried. She also sometimes has a habit of rushing instead of thinking things through, which leaves Clulutchi to take control of the situation. Unlike Clulutchi, Miraitchi can get confused or misunderstanding of love at times, although not to the same obliviousness as Melodytchi. Miraitchi enjoys flying, while Clulutchi doesn't. Also, Miraitchi claims that "she doesn't look the same as her sister," despite that they both share the same traits of biological appearances.

In Miracle Friends, both Miraitchi and Clulutchi are depicted as being bad at sports at first. However, In GO-GO Tamagotchi!, she is depicted as being very strong and athletic, and often plays soccer with Kuromametchi. This is likely due to her practicing a lot. She is part of the sports class at DoriTama School.

Miraitchi and Clulutchi have a shared passion for fashion design. While Clulutchi specializes in designing accessories, Miraitchi prefers designing clothes.

Miraitchi is a secret character exclusive to the Miracrise pierce obtained from any female teen winning the Miracle Coordinates game 3 times.

Miraitchi was a downloadable character from the 4U app.

Miraitchi is a NPC character on the Dream version that appears during the dancing minigame, along with Clulutchi. They may also be interacted with at My Town's park, and may be seen during weddings.

Miraitchi appears in the anime Tamagotchi! Miracle Friends as one of the main heroines along with her twin sister Clulutchi. The girls share their dreams together to become great fashion designers and run a shop of their own. But when they find themselves warped to the past and into the series' main timeline, they both embark on an adventure to find a way back to their future while following their dream careers. Both twins have Pocket Designers. Their father is Doctor Future, but after they are transported to the present, their home-stay parent is Madamutchi.

The main objective of the twins is to collect all 8 Dreambakutchis which were set free from Dream Center. The Dreambakutchis have the ability to return Miraitchi and Clulutchi to the future, but a mysterious Tamagotchi called X-Kamen is trying to take the Dreambakutchis as well. While initially seeing X-Kamen as an adversary, Miraitchi is the first to think that he might not be evil after all and convinces Clulutchi that they should try talking to him. When they learn that X-Kamen is Smartotchi and find out about his motives, they start to work together with him.

Miraitchi and Clulutchi depart for home in the final episode of Miracle Friends.

They return again in GO-GO Tamagotchi!, with the help of an inventive doorknob that allows them to travel through time.

Doctor Future is Miraitchi's father who works at the Dream Center research facility. Clulutchi and Miraitchi are often exasperated by his mistakes.

Clulutchi is Miraitchi's twin sister who is younger by one day. She is the calmer and more attentive sister, being able to remain level-headed in complex situations. Like her sister, she has the same dream to open up their own shop for all their designs.

Watchlin is Miraitchi's companion and tama pet. She is a living watch who accompanies Miraitchi and Clulutchi after accidentally sending them to the past. 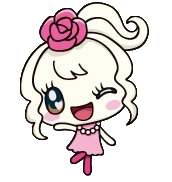 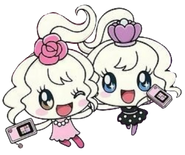 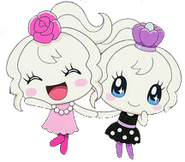 Miraitchi statue at the 2013 Tama Expo