Male:
Mogumogutchi (もぐもぐっち Mogumogutchi) is a male adult character that first appeared in the anime Tamagotchi! Yume Kira Dream as a background character. He was released as a raisable character on the Tamagotchi P's.

He is a light orange with a white stripe on his forehead, and has a red hat with an orange ball at the top. There is also cream-colored fluff on his head. He wears a red shirt-like that looks jagged at the bottom. He has small round ears and chubby cheeks.

Mogumogutchi is obtained by giving Maimaitchi 3-7 care misses, and by having the 'Gourmet' or 'Style' personality.

Mogumogu is a Japanese onomatopoeia for "munching". 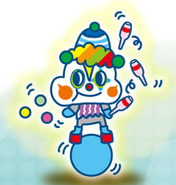 Closeup sprite on the Tamagotchi P's

Add a photo to this gallery
Retrieved from "https://tamagotchi.fandom.com/wiki/Mogumogutchi?oldid=85831"
Community content is available under CC-BY-SA unless otherwise noted.