Momotchi somewhat resembles a mouse or a lop-eared bunny. She has light pink fur, and her feet, tail, ears, and the top of her head are darker pink. She has oval-shaped eyes with blue irises. She also has a curly hair on her forehead.

Momotchi is depicted as cute and pampered. She is interested in flowers and gardening. Her favorite color is pink.

Momotchi is a downloadable character.

Momotchi is a female adult that can be raised on the Melody, Spacy, Dream, and Sanrio versions. She evolves from any female teen with 7 or more care mistakes, and My Town's theme is not changed to either "Sky" or "Floral". As Momotchi can't be encountered or married in any town, the First Generation is the only way to get her genetics.

In Tamagotchi: Happiest Story in the Universe! and Tamagotchi!, Momotchi is depicted as a student at Tamagotchi School. She is a minor character.

Momotchi got her first main role in episode 41 of GO-GO Tamagotchi!. She becomes impressed with Miraitchi and Clulutchi's endeavors and decides to become closer to them by becoming Miraitchi's "sister." In this episode, Himetchi is depicted as Momotchi's best friend.

Momotchi in Tamagotchi: Happiest Story in the Universe! 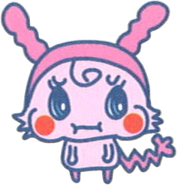 Add a photo to this gallery
Retrieved from "https://tamagotchi.fandom.com/wiki/Momotchi?oldid=97417"
Community content is available under CC-BY-SA unless otherwise noted.