Monakatchi has a round, brown body with a dark brown face and two brown buttons on his chest. He has stubby arms and legs, and bean jam oozing from the top of his head, emulating hair.

Monakatchi is a simple and pleasant boy. He doesn't talk often, but is popular and seen as attractive by many people and Tama-Pets because of his soft-spoken nature. His Tama Pet is called Monatototchi.  He ends all of his sentences with "mona" (もな).

Monakatchi is obtained from Maimaitchi with 3-7 care misses and trained with Charisma and Strength.

Monakatchi can be obtained from any male teen with good care (3-4 Care Mistakes with Maimaitchi, 2-3 with Bokuhoshitchi, or 5-6 with Cosmotchi) and the user trains him to have an Gourmet personality. However, if no personality training is used, there will be a 1/3 chance of the teen becoming Monakatchi. He sleeps from 21:30 to 7:00.

Monakatchi is in the Tama Pet class of Dream School.

Monaka (もなか) is a kind of Japanese dessert, which is bean jam sandwiched between two wafers. He is called this because that is what he looks like; with bean jam coming from his head. 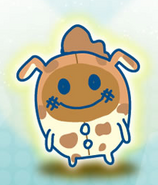 Monakatchi in one of GO-GO Tamagotchi! opening themes
Add a photo to this gallery
Retrieved from "https://tamagotchi.fandom.com/wiki/Monakatchi?oldid=101421"
Community content is available under CC-BY-SA unless otherwise noted.