Monkeytchi (もんきーっち Monkitchi) is a Tamagotchi from Patchi Forest. It appears as a non-raisable character on the Tamagotchi iD L.

Monkeytchi has a round body with round ears, skinny arms, and short, stubby legs. It is mostly light brown, but its face and ears are peach colored. It has beady eyes, pink cheeks, and a Kuchipatchi-like mouth.

Monkeytchi appears in the background when the player visits Patchi Forest.

Monkeytchi appears in episode 4. It runs past Kuchipatchi as he takes a bath and jumps in mud puddles. 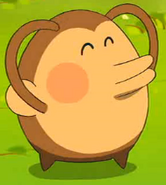 Monkeytchi in Tamagotchi: The Movie

Add a photo to this gallery
Retrieved from "https://tamagotchi.fandom.com/wiki/Monkeytchi?oldid=85354"
Community content is available under CC-BY-SA unless otherwise noted.