Male:
Monsieur Kikipapa (ムッシュ･キキパパ Musshu Kikipapa) is a male Tamagotchi character. He is the father of Kikitchi and the Celeb Sisters and the husband of Madame Kiki. He owns Celebria with his wife.

Monsieur Kikipapa has gold skin and a cream face. He has pink cheeks, large yellow eyebrows, and a curly yellow moustache. His eyes are usually closed. He wears a white robe and a white turban with a green sphere on top.

Monsieur Kikipapa debuted in the second movie, Tamagotchi: Happiest Story in the Universe!.

Monsieur Kikipapa's name comes from three words: Monsieur, a French honorific for men, Kiki, from Kikitchi's name, and Papa because he is a father. 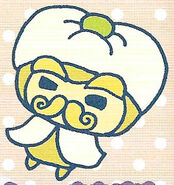 Monsieur Kikipapa in the Anime

Add a photo to this gallery
Retrieved from "https://tamagotchi.fandom.com/wiki/Monsieur_Kikipapa?oldid=98784"
Community content is available under CC-BY-SA unless otherwise noted.