Male:
Mr. Comb-bowie (コームボウイ先生 Kōmubōi-Sensei) is a male teacher at Dream School. He debuted in Tamagotchi! Yume Kira Dream. He appears on the Tamagotchi P's as a nonraisable character.

Mr. Comb-Bowie is a tall Tamagotchi with light yellow skin and blue-green eyes. He wears a white sleeveless shirt with black pants and he wears a utility belt that holds one tool. He has a big red comb fitted on his head which can he change the appearance of, such as making it look like letters. When it is wet, it is revealed that it is ordinary red hair.

Mr. Comb-Bowie is expressive, yet he has a calm voice and is good at singing. According to the Tamagotchi Friends Friendship Map, "His hair is his life".

Mr. Comb-Bowie is the teacher of hair-dressing class at Dream School. His students are Memetchi, Doyatchi, Yukinkotchi, and Tropicatchi. He is very romantic and has a crush on Ms. Musicatchi, but he tends to be too nervous to tell her. The comb on his head can be turned into different shapes; for example, he makes it spell the word "LOVE" when he attempts to reveal his feelings for Ms. Musicatchi.

In the final episode, his students motivate him to confess his love, but in the end, everyone thinks he loves Mitchi Sensei instead.

In episode 43, Mr. Comb-bowie finally tells Ms. Musicatchi that he loves her. She states that she does not have any feelings for him, which upsets him, but he cheers up when she says they can still be good Tama-Friends. 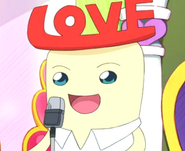 Mr. Comb-Bowie with the word "LOVE" 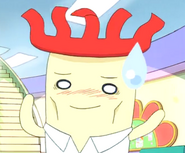 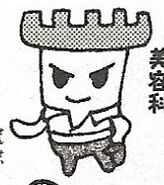 Mr. Comb-bowie in a manga panel from GOGO♪ Tamagotchi!
Add a photo to this gallery
Retrieved from "https://tamagotchi.fandom.com/wiki/Mr._Comb-bowie?oldid=85838"
Community content is available under CC-BY-SA unless otherwise noted.