Not to be confused with Mr. Kokuban.

Male:
Mr. Kokubantchi (こくばんっち先生 Kokubantchi Sensei) is a male teacher at the Dream School. He debuted in the anime Tamagotchi! Yume Kira Dream, and he also appears in Tamagotchi! Miracle Friends and GO-GO Tamagotchi!.

Mr. Kokubantchi appears to have a blackboard for a head. His body is yellow, and he has a tuft of blue hair on top of his head. His face is green, and he has blue eyes with white plus signs, blue eyebrows, an orange beak, and white division signs on his cheeks. He wears a card that has "E=mc²" written on it.

Every day he greets his students with cheerfulness and pep. The Tamagotchi Friends Friendship Map says that he is "still young at heart".

Mr. Kokubantchi first appears in episode 1. He is one of the first teachers that Mametchi and his friends meet at the school. 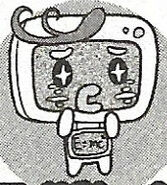 Mr. Kokubantchi in the anime

Add a photo to this gallery
Retrieved from "https://tamagotchi.fandom.com/wiki/Mr._Kokubantchi?oldid=93343"
Community content is available under CC-BY-SA unless otherwise noted.