Female:
Ms. Modetchi (モードっち先生 Mōdotchi Sensei) is a female Tamagotchi character who first appeared in the anime series, Tamagotchi! Yume Kira Dream. She appears on the Tamagotchi P's and the Tamagotchi 4U as a nonraisable character.

She is tall with a cream face and yellow beak. Her hair is red with two buns, one on each side. She wears a black suit that covers her whole body and a gray vest. She also wears a light gray scarf with darker gray moons on it.

She is the teacher of the fashion-designing class at Dream School which consists of Amiamitchi, Violetchi, and the Spacy Brothers. She is very stylish when it comes to clothes.

She is usually elegant and graceful when teaching her class, but she isn't serious and can be mischievous when she isn't teaching. She knows about Comb-bowie Sensei's crush on Musicatchi Sensei, and likes to cause him problems whenever he tries to confess his feelings to her. When Comb-bowie Sensei is upset, Ms. Modetchi often watches and grins to herself.

She is also seen flirting with Comb-bowie Sensei, but it is unknown whether she does it because she truly has affection for him (also explaining why she prevents him from confessing to Musicatchi Sensei) or if she just does it to distress him more.

She is voiced by Akemi Okamura.

Her name comes from the Japanese word "moderu" (モデル), which means "model". 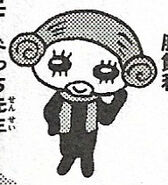 Add a photo to this gallery
Retrieved from "https://tamagotchi.fandom.com/wiki/Ms._Modetchi?oldid=91806"
Community content is available under CC-BY-SA unless otherwise noted.