Mufufutchi appeared on the 15th Anniversary Character Poll as a male adult candidate.

Mufufutchi is a yellow Tamagotchi with a body shape similar to Kuchipatchi's. The lower third of his body is lumpy or fluffy. He has sleepy eyes, a cat mouth with chubby corners, and pink cheeks.

Mufufutchi is a leisurely Tamagotchi who speaks slowly. He is frequently saying "mufufu..." at the beginning or ending of his speech.

His name may come from the Japanese word mufuu which means calm and quiet. Mufu is also sometimes used as a sound effect for breathing or sighing. 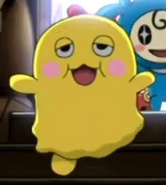 Add a photo to this gallery
Retrieved from "https://tamagotchi.fandom.com/wiki/Mufufutchi?oldid=96460"
Community content is available under CC-BY-SA unless otherwise noted.