Pet Simulator
My Tamagotchi Forever, known simply as My Tamagotchi (マイたまごっち) in Japan, is a free-to-play mobile game developed by Paladin Studios. The game was announced on November 23rd, 2017, on Tamagotchi's 21st anniversary, and was officially released worldwide on March 15, 2018. On November 23, 2021, the app was made available to Japan as part of Tamagotchi's 25th anniversary.

The game will allow the player to raise a Tamagotchi along with exploring Tamagotchi Town. The player can earn coins and level up through playing minigames, and share memorable moments with friends through the app. The player can also unlock food and costumes for their Tamagotchi, as well as buy decorations for Tamagotchi Town. As adults, they have careers, which require things such as reaching a certain score in a game, eating a certain type of food 10 to 15 times, and acquiring the outfit associated with that career. When completed, a new egg will hatch.

Unlike other Tamagotchi installments, growth is determined not by quality of care, but instead what foods the Tamagotchi is fed. Baby stages have an equal chance of that character appearing. Toddlers evolve from Babies after 4 hours, Teens evolve from Toddlers 36 hours after that, and Adults evolve from Teens after about a week. Tamagotchis also do not die, run away, or return to Tamagotchi Planet, but instead grow and take on careers no matter how well cared for they are.

Announced along with the game, the Character Contest took entries from November 23rd, 2017 until January 10th, 2018. Players entered the contest by registering for a game account early, and the winner was randomly selected afterword. The winning entry had a character designed after them, Neliatchi, who was added in the August 2018 patch. 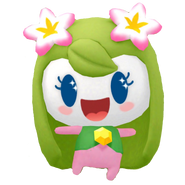