Nandetchi is blue, and has a little point on his head, similar to Gozarutchi's. He wears blue overalls, and glasses.

Nandetchi is a very curious and inquisitive Tamagotchi, and asks lots of questions, most often asking "Why?". He ends sentences with "detchi", which is part of his name.

Nandetchi evolves from Maimaitchi with 3-7 Care Mistakes and trained with Intelligence.

Nandetchi is one possible character that can appear when visiting the park.

Nandetchi can be downloaded to the toy via the mobile app.

Nandetchi goes to Dream School, and is in Robot Class, with Mametchi, Himespetchi and Hoshigarutchi. He admires his classmate Righttchi. He told Mametchi that Righttchi was the greatest teacher on the planet, even though he is just a student. He calls him "Righttchi-San". He's also a member of Rainboys, where he plays bass for the band.

Nandetchi is currently the only Tamagotchi who knows about Yumemitchi's and Kiraritchi's transformations with the Yume Kira Bags. When he told everyone else, they thought it was a joke and Nandetchi was desperate to make everyone believe him. By using various costumes, he kept pretending to be a different person in need of help so he could take a photo of Yumemitchi and Kiraritchi using their Yume Kira Bags. In the end, however, he decided to keep the girls' secret safe and tore up the photos.

Nandetchi is Pianitchi's childhood friend, and the two had buried a time capsule together before Pianitchi moved to Melody Land.

In GO-GO Tamagotchi!, he discovers Miraitchi and Clulutchi's Knock Tap. Not knowing what it does, he accidentally sends himself into the prehistoric past. At the end of the episode, he manages to return to the present, but now as a withered old Hobo. However, it is still unknown how he revert back to his younger self in the next episode.

Nande (なんで) translates to why. 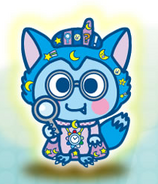 Nandetchi as a police officer. 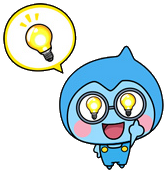 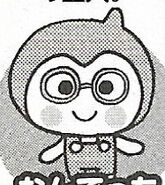 Nandetchi as a Fish costume

Nandetchi with a Mirror
Add a photo to this gallery
Retrieved from "https://tamagotchi.fandom.com/wiki/Nandetchi?oldid=101681"
Community content is available under CC-BY-SA unless otherwise noted.