Nazotchi appears as a big, fuzzy black ball wearing a wide, red hat, and two eyes visible from under the brim. It has two arms and legs, and is often depicted carrying a bindle.

Nazotchi is usually described as a quiet and elusive Tamagotchi. It serves as the postman of Tamagotchi Town, delivering mail, paychecks, newspapers, presents, and fortunes to Tamagotchis daily.

In Tamagotchi Corner Shop 3, it is stated that Nazotchi is good with riddles. Nazotchi themself, also mentions that they must talk occasionally or they'll forget how to.

Nazotchi serves as a placeholder character; if two Tamagotchi units connect but one features a character that doesn't appear on the other, Nazotchi appears in their place instead. This allows the connection to continue despite the missing character data. From the Tamagotchi iD onward, new releases were able to transfer character data while connecting, negating the need for Nazotchi; however, both the iD and iD L contain Nazotchi for connecting with the Tamagotchi Plus Color.

Nazotchi cannot be directly raised by the user, though it can be obtained indirectly on the Tamagotchi Connection Version 5, V5 Celebrity, and Tamagotchi Music Star, as a secondary character by marriage.

Nazotchi cannot be raised by normal means, but it can be obtained through debugging. It acts as a Serious adult and only evolves into Otokitchi/Ojitchi.

One of the Nazotchi's primary function on the Music Star is its original interpretation of being a postman, appearing at the door several times a day to deliver presents from the Gotchi King (or a parent from the previous generation, from the second generation onward) and letters from fans, which may either be a heart, star, or poop. It also appears as the store's shopkeeper.

As the Music Star is compatible with the Family pets, Nazotchi appears as a character placeholder. The two can marry by sending one Family character over to the Music Star; the character will be rendered as Nazotchi and includes a full set of animations.

Nazotchi appears as a replacement character when connecting to either a Hexagontchi, iD or iD L.

After a Tamagotchi connects to another unit, Nazotchi may occasionally appear in the garden to deliver letters between them. It will also appear during an animation if the user's Tamagotchi shares the Party Popper item with Maskutchi, or uses it with a My Tama that has the Party Popper as a favorite item.

After a Tamagotchi connects to another unit, Nazotchi may occasionally appear in the garden to deliver letters between them.

Nazotchi appears to deliver food or items ordered by the tamagotchi through their phone. They also occasionally appear in the garden to deliver letters.

Nazotchi appears in "Ding Dong! You have a Visitor" to deliver a package to Mametchi. It does not speak.

If a player lands on Nazotchi's space, one Nazotchi will appear and redirect that player to another town.

Nazotchi appears in the Tamagotchi Corner Shop game series as a customer who visits the player's shops. 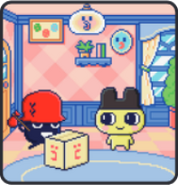 Nazotchi delivering an item on the Tamagotchi Pix

Nazotchi in the anime
Add a photo to this gallery

Retrieved from "https://tamagotchi.fandom.com/wiki/Nazotchi?oldid=104614"
Community content is available under CC-BY-SA unless otherwise noted.